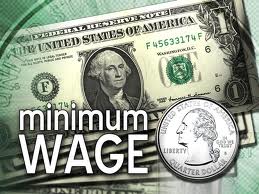 Supporters of a higher minimum wage are hoping lawmakers and Democratic Gov. Andrew Cuomo tackle the issue in a lame-duck legislative session before Republicans take control of the state’s Senate in January.

Cuomo has vowed to push for a higher minimum wage, and a special legislative session this fall could be his best opportunity to make good on his promise, but he and top lawmakers say it’s unlikely to happen.

Proposals to boost the wage from $8 an hour to $10.10 an hour and allow New York City to raise it even higher will face significant opposition next year following big GOP victories in last week’s elections.

“If Governor Cuomo wants to show that he’s a strong, effective leader and wants to make government work for working people, then this is a great opportunity,” said Michael Kink, executive director of the Strong Economy For All Coalition, one of several groups pushing for a higher wage.

Cuomo made his support for an even higher wage part of his successful re-election bid this fall. But it’s an objective that may be out of reach when the new session begins in January.

Republicans picked up two seats this election to win a clear majority of 32 seats in the 63-member body. Currently the GOP has control of the Senate, but only thanks to a power-sharing arrangement with a faction of breakaway Democrats, a small group whose members have supported the minimum wage increase.

A special session would give supporters of a higher minimum wage one last chance before that GOP majority takes over. New York City Mayor Bill de Blasio, a first-term Democrat and a leading supporter of raising the minimum wage, said this week that he hoped to discuss the possibility of a special session with Cuomo.

But Cuomo dismissed the idea last week, saying he doesn’t expect a special session, and top lawmakers say there are no plans to return before the new year.

“Nothing has been discussed, and there has been no talk about an agenda,” said Michael Whyland, a spokesman for Democratic Assembly Speaker Sheldon Silver.

Meanwhile, a state board is considering whether to raise the minimum wage for servers, busboys and other tipped workers. The panel meets Thursday in Buffalo.

Tipped workers may now be paid less than the minimum wage as long as their tips make up the difference. A coalition of labor unions, service workers and others is pushing to eliminate the tip wage and require service workers to be paid the full minimum wage before tips.

The state wage board is expected to issue its recommendation before Cuomo’s labor commissioner makes a decision in February.