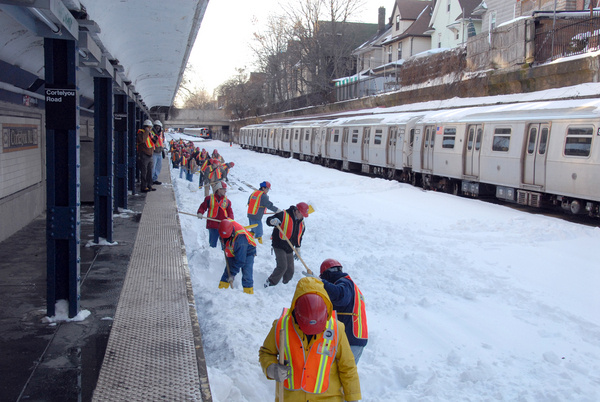 Governor Andrew M. Cuomo today announced that the Metropolitan Transportation Authority (MTA) has activated New York City Transit’s 2014-2015 winter operations plan in preparation for the arrival of winter weather conditions. This plan, which affects NYCT subways, buses and the Staten Island Railway, is updated and put into effect in mid-November each year in an effort to anticipate the effect of inclement weather on service.

“New York’s mass transit system is vital to keeping the city going – and we’re doing everything necessary to make sure that the system runs as smoothly as possible through the cold winter months,” Governor Cuomo said. “By activating this winter operation plan, the MTA is doubling down on its preparations for inclement weather and taking important steps to help buses and trains avoid delays and keep commuters safe.”

As North America’s largest public transit system, the MTA regularly monitors a customized forecast from various weather-tracking firms as well as the National Weather Service. It allows NYCT to react quickly to impending inclement weather and keep the system running by implementing its storm command and control structure, making adjustments to staffing and service, readying maintenance and snow-fighting equipment, and coordinating emergency responses or cleanup.

The 2014-2015 weather plan has been updated to include new snow-fighting equipment for the Department of Buses; new improved cold-weather and communications equipment; increased planning and collaboration with the Department of Sanitation; and more alerts and checks on service for quicker and more proactive operations planning.

NYCT President Carmen Bianco said, “We never know what each winter will bring, so New York City Transit has to be prepared for anything. This year we have invested in more equipment such as new all-season tires to make our bus fleet more safe and better prepared to handle snow and icy roads, and improved technology that tracks our buses and lets us tailor service route by route rather than make blanket service changes.”

Other highlights of the plan include:

• As part of a new initiative, articulated buses will be retrofitted with all-season tires. Overnight buses will have either all-season tires or snow chains;
• Snow-equipment training and increased plowing coordination with the Department of Sanitation;
• Twenty-eight pieces of snow-fighting equipment to prepare and de-ice facilities, terminals, layovers and other commonly used points for buses;
• The Department of Buses is using tracking technology to alert managers if service falls below minimum expected levels on any route;
• Development of special “winter weather schedules” that can substitute for service curtailments on a route-by-route basis that take into account anticipated ridership and school closings; and
• Coordination with the Department of Sanitation to ensure an adequate supply of de-icing products such as salt and rock salt, including a build-up of strategic reserves that can be adjusted as needed.

• Eight new R156 locomotives and 79 revenue trains with scraper shoes, which help reduce icing on the third rail;
• Increased personnel and enhanced communications equipment at the Incident Command Center;
• Snow-fighting equipment that includes 10 snow-throwers; 8 de-icers; 4 jet blowers; 61 locomotives; and 22 rider cars, which are heated/insulated work cars that can be used to carry crews and equipment to snow-removal work sites. The cars are equipped with ice-scraping mechanisms to help keep the third rail clear and can be used as rescue trains; and
• Winterization of signal equipment, to protect nearly 220 miles of tracks that run outdoors. They include the Rockaway AS, Sea Beach N, Brighton BQ and Dyre Av 5 lines.