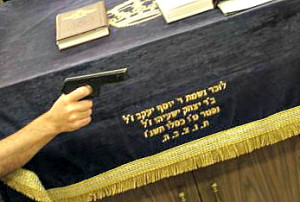 We begin with the rav’s conclusion, that anyone with a licensed weapon must carry it on Shabbos during this worrisome period of increased attacks and Arab violence. A person should not carry a mobile phone and it makes no difference if the phone is on or off.

However, phones should be left on and left in strategic places in shuls in the event of an emergency chas v’sholom.

Following of the Har Nof attack may one carry a cellular telephone in one’s pocket or is one attack not sufficient to compel halacha to permit this on Shabbos?

We must first check if the incident that we are discussing is similar to a case in halacha. We know that pikuach nefesh or safek pikuach nefesh take priority over Shabbos. Hence we must decide that if my actions will provide a 1 in 100 chance of saving a life should such an occurrence repeat itself.

We do not argue that people are afraid as we can see they walk on the street looking from side to side. However, is this sufficient to transgress Shabbos?

We can say that anyone with a licensed weapon must carry it on Shabbos. If there was a definite situation of pikuach nefesh there would be no doubt and this is now safek pikuach nefesh and this compels carrying one’s weapon too.

There is no doubt that is one of the mispallalim in that shul on that day had a gun, it is entirely possible the tragedy would have been averted to some degree.

We had a meeting of the Har Nof Council including rabbonim and they discussed the possibility of some residents taking courses and getting a gun license. I think this too is important and not only isn’t there a problem with this, it is important. For modesty reasons I think at present this should be limited to men.

The neighborhood has been plagued with home robberies on Friday night when people are not home but that is far less dangerous than an assailant entering a home that is occupied.

In burglary cases in which the perpetrator was apprehended, most were Arabs. Now think of a case that Arabs walk into a home on Shabbos what can occur. That is why Har Nof as the Hashomer organization and a Druse driver is constantly patrolling and that has reduced the break-ins by 90% and I think this must be replicated in other neighborhoods too.

What about protecting girl’s schools?

They must have armed guards too and this is our right and we must demand this. The same for kindergartens.

Regarding a cellular phone, if a shul as an accessible phone that is fine. If not, perhaps a gabbai can make sure there is a phone or two that remain accessible for any event, which we hope will not occur. I fear that if we begin permitting phones, tomorrow people will start driving their cars for a security patrol. We must be careful with what is and is not permitted.

Hence I feel that one does not have to carry a phone and it makes no difference if the phone is on or off.

The shul can leave one or two phones in open areas that everyone is aware of. There is no reason for people to carry a phone in their pocket. I stress that if there is the smallest need, I permit it but here we can place phones in shuls and there is no need to actually carry them on Shabbos.

In my shul and others there are also EMS volunteers who are usually armed and have communications devices. A shul can request from many people to leave phones over Shabbos so I do not see a need to permit one to carry muktzah. What is required must be done but we must not get dragged into a state of panic we must do our best to maintain the kedusha of Shabbos. The phone is muktzah and I cannot see a need to carry it at present.

In a case of need, one must use the phone to call for assistance as quickly as possible without any shinui!

What about cell signal blocking devices? You know in Kehillas Bnei Torah they have such a device and that is why it took so long to call for help. They had to get outside. All of the phones were blocked inside.

You raise a very important point. First of all, the tzibur must learn to put the phones away in shul! That said, I would say that at least for this period, these devices should be disabled to permit cellular signals, at the very least until the security crisis in the capital is behind us G-d willing.