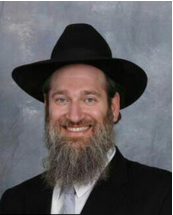 The following was sent by a YWN reader.

I returned home, emotionally exhausted, from burying my friend Aryeh Kupinsky. I entered my apartment building at the same time as my

brother-in-law Rafi, who lives in a different city but who comes in to Har Nof regularly in his capac ity as a counselor. Gently, he asked me if I had personally known any of the victims of the massacre. Thinking that Rafi may recall him from various family Simchos, I sadly said, “Aryeh Kupinsky”.

Now, Aryeh was a big man. He towered over most anyone, was broad in the shoulders and deep in the chest, and he had a long, red beard.
But it was not his physical appearance that allowed Rafi to recall him. Stricken, he asked, “Aryeh Kupinsky? The one who always had a big smile?” Aryeh was a doer. When I think of him, the image my mind conjures up is one of Aryeh in motion. Long legs taking great strides, powerful arms reaching out with great sweeping gestures. And what is Aryeh doing? Why, he’s helping someone. Aryeh lived for others. His first thought was never for himself.

As Rabbi Jonathan Taub put it so well, Aryeh was simply incapable of being a guest at a Simcha. If he was there early, then he
would single-hande dly flip over tables and set them on their feet. He often did not leave until everything was put away. Once, a friend insisted that
he sit, enjoy himself, and let those who were hired do the work. When he next saw Aryeh, he had lugged in all of the cartons of drinks that he had
located outside of the hall, and he was finishing loading them into the refrigerator.

How many times had I heard him say, “What can I do to help?” When I first came to Yeshivah nearly two decades ago, someone explained to
me that Aryeh Kupinsky was a person who would “Do anything, for anyone, at any time”. Aryeh was recently married when I first met him, but I heard
that in his dorm room when he was a Bachur, he had put up a sign that read, “Please borrow anything – no need to ask”. Who DOES that?

Aryeh acted quickly and quietly. He asked for no recognition,and many were unaware of things that he had done. Here is one example that
comes to mind. On Tisha b’Av for the past number of years, on the Neve campus, there has been a very well-attended program featuring superb
lecturers. Beginning with Shacharis and ending with Minchah, the program has incorporated Kinos interspersed with hard-hitting, powerful, and
sometimes fiery speeches. By two o’clock in the afternoon, everyone has gone home. Well, nearly everyone. There was one man who made sure that the
Sefer Torah and two Haftarah scrolls that has been used for Davening were returned from the dining room to the Shul, and that the Aron Kodesh was
properly locked.

Aryeh was a deeply emotional being; he wore his emotions on his sleeve. When speaking about a topic important to him, the passion was
evident. Nowhere was this truer that when Aryeh was talking in learning. Aryeh was a ben-Torah and a Lamdan. When we learned for a brief period as Chavrusos, he would get fired up at the drop of a hat. The truth is that over the years, when I would meet up with Aryeh, my heart would sometimes fall. You see, Aryeh was always bothered by something.

Not the *same* thing. But he was constantly nursing a Shaila, turning it over, gnawing at it, trying to resolve it. And he would share it with you when he saw you. There was no such thing as, “Interesting! I’ll have to think about it.” Nor was it possible to simply suggest a Terutz. The Terutz had to be analyzed, weighed for merits and demerits, and then discussed again. When I “didn’t have the time” for this process, I would feel somewhat exasperated. How I would love to be able to experience such a delay again …

Just days after Tisha b’Av two years ago, Aryeh’s daughter Chaya did not wake up. She was just shy of her fourteenth birthday. Chaya

had been mature for her age. Until that tragic morning, she had been the one to shoulder much of the burden in the house, acting as almost a second
mother to her siblings. After her untimely passing, her parents found a private list, pages long, of personally composed Tefilos which she
apparently had expressed daily.

Aryeh was inconsolable after Chaya’s death. Everything reminded him of her, and tears were never far below the surface. For much of the next two years, the family did not eat their Leil Shabbos night meal at home, as this family time was too painful for Aryeh to experience without
his beloved eldest daughter. Sitting at another’s table allowed him to contain the sorrow – for the most part. Only when giving his other precious
children Berachos was Aryeh unable to contain his heart-wrenching sobs.

Being Aryeh, however, was incompatible with wallowing in pain. Kenesiyos were organized and held in Chaya’s memory, inspiring others to
Daven with more Kavana and improve their Midos. Aryeh often said that it was a great source of comfort to him that so many changed their lives for
the better as a result of Chaya’s death. Yaakova Kupinsky believes that these words, heard so often by the family, serve as a focus for them now at this enormously difficult point in their lives.

But this was not enough. Aryeh sought to establish something permanent in Chaya’s memory. We live in such a world of Shefa, b’Chasei
Hashem. And with so many good, kind Yidden in the world, there are hundreds
of categories found listed under “Gemach” in Frum directories worldwide. But Aryeh Kupinsky, Ba’al Chesed extraordinaire, managed to found a Gemach
rare enough that – to the best of my knowledge – there is only one other
one in existence. A freezer Gemach! He purchased a number of medium-sized freezers – of the six-drawer variety – and advertised that they would be
available free of charge for use before Yomin Tovim and Simchos. He told me – with a mixture of incredulity and regret – that before Rosh Hashanah, he
had to turn down 92 applicants. *Ninety-two*! Just days before Aryeh was so
brutally taken from us, he was attempting to figure out how to acquire more freezers for this noble purpose.

What elevated Aryeh’s Gemach from merely unique to
awe-inspiring, however, was the manner in which he ran it.

If you know anything about Har Nof, you know that it is built around a mountain. Every street is on another level, and many are stories
below or above those closest to them. The entire neighborhood is made up of long, winding streets, and steep, winding staircases.

Leaving the Kevurah, a member of the Chaburah related that he
had yelled at Aryeh the last time that he had spoken to him. He had come across Aryeh while he was transporting a freezer from one recipient to
another. On a hand truck. This was the only mode of transportation employed by the Gemach – hand-wheeled, bumped up and down every step and along every
roadway. And there was only one “employee”.

“Are you crazy?!” our friend asked Aryeh. “Isn’t it enough t hat
you furnish people with a free freezer? Let them pay fifty Shekel for delivery!” Aryeh recoiled. “This is my Chesed!” he protested.

I have seen in these last two days blurbs describing Aryeh that
mention that he ran a Gemach. Aryeh did not run a Gemach. He *was* a Gemach. On that fateful Tuesday morning, when the Mispalelim became
aware of the malevolence among them, they ran for their lives. Not so
Aryeh. Numerous reports have Aryeh screaming at everyone in the Shul to run, while he made sure that they could. He hurled shtenders, chairs,
Siddurim – whatever came to hand – at the terrorists to distract them, at
one point physically restraining one of them. There were others who followed his example. After taking multiple blows – some intended for
others – Aryeh fell. There is no doubt that he saved others’ lives.

There was an unexpected delay when we arrived at the plot in Har ha’Menu chos where Chaya is buried. The gaping hole in the ground was
not quite long enough. We waited in the dark while the Chevra Kadisha took out their tools, and finally the earth reluctantly took Aryeh back.

Aryeh Kupinsky was indeed a big man. But his heart was ever so
much bigger.

*I have received permission from Aryeh’s family to disseminate these
thoughts. Please share with any who will appreciate them. Donations for the
families of the victims can be made through the following link: http://www.helpharnof.com/