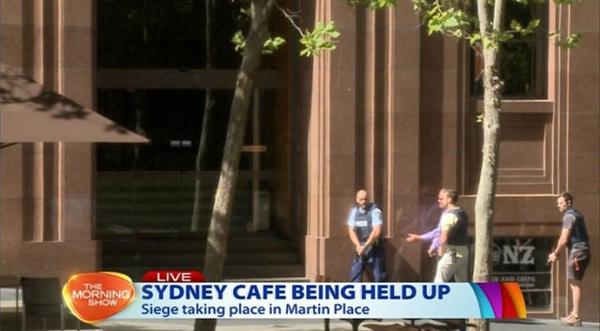 UPDATE 10:00PM EST: NSW police commissioner: “We’ve moved to footing that would be consistent with a terrorism threat” in Sydney hostage situation.

UPDATE 9:26PM EST: US Consulate in Sydney issues emergency message to US citizens to “maintain a high level of vigilance”

AP UPDATE 9:08PM EST: An apparent hostage situation was unfolding inside a chocolate shop and cafe in Australia’s largest city on Monday, where several people could be seen through a window with their hands held in the air.

New South Wales state police said they were dealing with “an armed incident,” though they would not confirm hostages were being held inside the Lindt Chocolat Cafe in Sydney. But television footage shot through the cafe’s windows showed several people with their arms in the air and hands pressed against the glass.

“Specialist officers are attempting to make contact (with) those inside a cafe,” police said in a statement.

TV footage showed two people inside the cafe holding up what appeared to be a black flag with white Arabic writing on it.

Zain Ali, the head of the Islamic Studies Research Unit at the University of Auckland, said it was difficult to read the message because media images showed only the lower part of the flag. But he believed it was the Shahada, or declaration of faith, largely because a black flag with white writing in a contemporary context often contains that message. He said he could make out the word “Muhammad.”

Ali said the Shahada translates as “There is no deity of worship except God (Allah), and Muhammad is the messenger of God.” It is considered the first pillar of Islam’s five pillars of faith, and has been used by groups like al-Qaida and Islamic State but wasn’t invented by them, Ali said.

A police spokeswoman said no injuries had been reported from the incident. Heavily armed officers were lined up outside the cafe, and a man with a backpack inside the cafe could be seen walking back and forth in front of the glass doors.

Prime Minister Tony Abbott said the National Security Committee of Cabinet met to be briefed on the situation.

“This is obviously a deeply concerning incident but all Australians should be reassured that our law enforcement and security agencies are well trained and equipped and are responding in a thorough and professional manner,” Abbott said in a statement.

The cafe is located in Martin Place, a plaza in the heart of the city’s financial and shopping district that is packed with holiday shoppers this time of year. It is home to the state premier’s office, the Reserve Bank of Australia, and the headquarters of two of the nation’s largest banks. The state parliament house is a few blocks away.

Streets in the area were closed, offices evacuated and the public told to stay away.

UPDATE 8:42PM EST: US Consulate in Sydney has been evacuated and US Citizens there being warned to be on high alert.

UPDATE 8:34PM EST: One man has been arrested near the scene but it is not related to the siege.

UPDATE 8:25PM EST: Lindt’s CEO says there could be as many as 50 hostages inside the cafe.

@NSWPolice Website Has Crashed Due To Traffic. They Released The Following Statement:

.@NSWPolice Website Has Crashed Due To Traffic. They Released The Following Statement: pic.twitter.com/o2ax2IgBbd

UPDATE 8:04PM EST: The Terrorist appears to be middle-aged man wearing a bandana with Islamic lettering.

It is being reported that two gunmen have taken several people hostage at a cafe in the Australian city of Sydney.

Pictures on Australian television showed people with their hands up against a window, and a black flag with Arabic writing.

At least a dozen police officers are surrounding the site and the area is currently closed off.

UPDATE 7:52 PM EST: Unconfirmed reports of 2 gunman pacing the cafe holding one hostage and using the civilian as a human shield.

UPDATE 7:41 PM EST: The following is a statement from PM Tony Abbott:

New South Wales police and the Australian federal police are currently responding to a reported hostage-taking incident in Martin Place in Sydney.

I have spoken with NSW Premier Mike Baird and offered him all possible Commonwealth support and assistance.

The National Security Committee of Cabinet has also convened for briefings on the situation.

This is obviously a deeply concerning incident but all Australians should be reassured that our law enforcement and security agencies are well trained and equipped and are responding in a thorough and professional manner.

We will provide regular updates as further information becomes available.

Update 7:22 PM EST:  There are helicopters flying above the area which is the reason for the ‘No Fly Zone’ An official rebuffed the rumor that there is a total ‘No Fly Zone’ over Sydney City.

BREAKING: Gunman in #SydneySiege says he has “devices all over the city,” demands to speak with Prime Minister –@JFXM http://t.co/wTO5RzOWe0

Update 7:03 PM EST: There are 13  hostages in the cafe.  The count includes employees and customers. At approximately 9:44 AM, a man carried  a blue bag into the busy Sydney cafe and told the people behind the counter that he had a gun. The doors to the cafe were then locked by a second Islamic terrorist. The flag which the hostages are holding  up appears similar to the ISIS flag however it is a Shahadah flag which states that Allah is the only ruler. This has been ruled as an act of terror.

A gunman has taken several people hostages at a cafe in the Australian city of Sydney.

Pictures on Australian television showed people with their hands up against a window, and a black flag with Arabic writing.

At least a dozen police officers were surrounding the site and the area was closed off.

There were also reports that a person was seen inside the cafe waving an Islamic State flag.

Police confirmed an operation was under way at the shop in Martin Place.