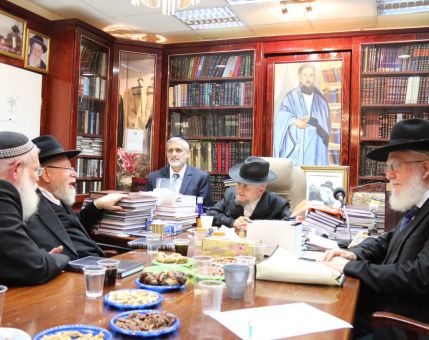 In the case of the dati leumi Tekuma Party, the word of the rabbonim is just their opinion and it appears it does not compel the actions of the politicians. While HaGaon HaRav Dov Lior Shlita and HaGaon HaRav Elyakim Levanon Shlita instructed Uri Ariel to break from Bayit Yehudi and align with Eli Yishai, Ariel brought the matter to the party’s central committee. The leadership body of Tekuma voted to remain in Bayit Yehudi in defiance of the party’s rabbonim. In actuality, this is not a new phenomenon in the dati leumi camp for even in the old National Religious Party, prominent rabbonim including HaGaon HaRav Mordechai Eliyahu ZT”L and HaGaon HaRav Avrohom Kahana Shapira ZT”L were often consulted but not always did the party follow their instructions for unlike with the chareidi parties, the politicians have the final say, not the rabbonim.

After the vote of the Tekuma Central Committee, Rabbi Lior and Rabbi Levanon met with HaGaon HaRav Meir Mazuz Shlita and the rabbonim expressed their support for Eli Yishai and his Ha’Am Itanu party. Persons close to Yishai report that in the coming days other prominent rabbonim will be meeting with Rav Mazuz to express their support as well.