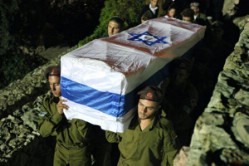 An Israeli team landed in Cairo during the predawn hours on Thursday 3 Teves 5775 to engage in negotiations towards receiving the return of 22 bodies of IDF soldiers killed in wars between Israel and Egypt and their burial locations are unknown, the PA (Palestinian Authority) Maan news agency reports.