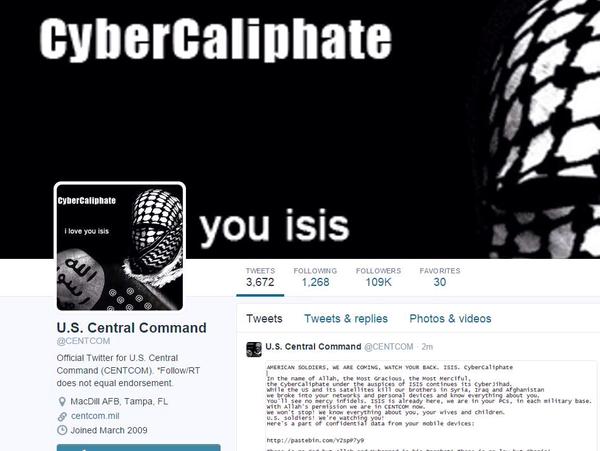 The account’s profile images were changed to black and white graphics with the phrases “Cyber Caliphate” and “I love you isis.”

Those were soon followed by more posts ranging from apparent military scenarios to threats against U.S. troops.

“We won’t stop! We know everything about you, your wives and children,” one post blared.

Later messages included images of what were apparently spreadsheets labeled as containing the contact info and home addresses of retired U.S. army generals.

Other tweets claimed to include military plans from Pentagon networks. One such image showed a map of China with labels of different military assets. Another supposed Pentagon image featured a map of North Korea with labels for nuclear facilities.

Central Command, based at MacDill Air Force Base in Tampa, manages U.S. military operations in the Middle East and is home to a multinational command center that has overseen the war on terror.

A senior defense official confirmed that the two accounts were compromised and said U.S. Central Command was taking appropriate measures to address the matter. The official spoke on condition of anonymity because the official was not authorized to speak about it publicly on the record.