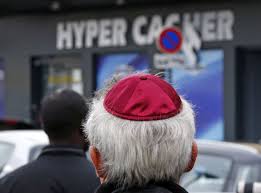 The Following is VIA Newsweek.com

A prominent Jewish leader has written to the governments of all the EU countries, calling on them to pass legislation giving special licence for Jewish people to carry guns.

In a letter sent to interior ministries around Europe and obtained by Newsweek, Rabbi Menachem Margolin, director general of the Rabbinical Centre of Europe (RCE) and the European Jewish Association (EJA) – the largest federation of Jewish organizations and communities in Europe – writes: “We hereby ask that gun licensing laws are reviewed with immediate effect to allow designated people in the Jewish communities and institutions to own weapons for the essential protection of their communities, as well as receiving the necessary training to protect their members from potential terror attacks.”

Speaking to Newsweek, Rabbi Margolin added that he believes that “as many people within the Jewish community as possible” should carry weapons.

The call comes in light of the recent attacks in Paris and increased anti-semitic attacks in Europe which Rabbi Margolin writes “have revealed the urgent need to stop talking and start acting”.

Last week, four Jewish men were killed when Amedy Coulibaly took hostages in a kosher supermarket in Porte de Vincennes, eastern Paris. During the resulting siege, Coulibaly told a French TV station via phone that he had targeted the shop ‘because it was Jewish’. Some 2,000 mourners attended the funeral of  Yoav Hattab, Yohan Cohen, Philippe Braham and Francois-Michel Saada at the Har Menuhot cemetery in Jerusalem on Tuesday.

Highlighting the threat of European-born jihadists returning from the Middle East, such as those who carried out last week’s attack on Charlie Hebdo magazine, Rabbi Margolin added: “We need to recognise the warning signs of anti-Semitism, racism, and intolerance that once again threaten Europe and our European ideals.”

According to Rabbi Margolin, a license to carry a weapon would provide people in the Jewish community with a sense of security that is sorely lacking in Europe, particularly in light of recent events. “Right now Jews do not feel safe,” he said.

“[The police] are not doing enough, for sure. We just need more. The best solution is having at least two police officers at each Jewish institution, 24 hours a day. Until that happens we need to be able to feel secure in other ways.”

Rabbi Margolin said that being allowed to carry a weapon would “allow our people to feel protected” adding that the weapons would all be registered. “We will be under the supervision of authorities. It would be completely controlled in the most professional way.”

EU law does allow for the carrying of guns under a license, but leaves specific gun legislation down to individual member states. Neither the Department for Home Affairs and Migration in Brussels nor the UK Home Office were willing to comment on the letter at this stage.

On the type of weapon people would be equipped with, Rabbi Margolin said: “Even just a gun. I’m not referring to tanks, it’s not about heavy weapons. It’s just that everyone would have something in their pocket.”

The Brussels-based rabbi, who recently discussed Palestinian statehood and the removal of Hamas from the EU’s list of terrorist organisations with foreign policy chief Federica Mogherini, said he is arranging meetings to discuss the campaign over the coming weeks.

Rabbi Margolin also criticised Israeli prime minister Benjamin Netanyahu’s response to the Paris attacks in which he called for French Jews to “come home” to Israel, saying that such campaigns make it harder for European Jews to live securely.

“The Israeli government should not make people panic. Immigration is not the solution to the terror,” he said.

“Each time something terrible happens more people think of immigration, but Jewish people have lived in Europe for over 2,000 years. For many, Europe is their homeland. To state there is no other solution except to leave Europe and move to Israel is just saying that the government has failed.”

The rabbi said that the campaign to license arms has received positive comments from the Jewish community, with most people saying being armed with a weapon would allow them to feel more secure.