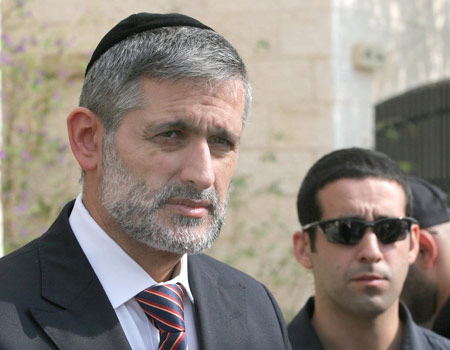 Eldad Yaniv, number 30 on what is now referred to as the ‘Zionist Camp’ list (Labor Party/The Movement) is calling to disqualify the candidacy of MK Eli Yishai of the Yachad – Ha’Am Itanu party. In the letter sent by Yaniv’s attorney to Attorney General Yehuda Weinstein, he asks that an investigation is launched into Yishai’s purchase of his new apartment in the Mishkenos Ha’uma complex. Yaniv claims the apartment was purchased through a trustee, naming Asher Mishali, who is a member of the Jerusalem Municipal Council. Yaniv alleges that Mishali’s career was advanced by buying the apartment. Yaniv points out that Mishali was stuck between a rock and a hard place since Mishali is subordinate to Yishai.

Yishai responded, explaining the opposite is true. He explains the trustee was used to prevent giving the appearance of corruption. He detailed that his family wished to move, informing him of this five years ago. The family purchased a four bedroom apartment in the Mishkenos project, part of a group purchase. A trustee handled the purchase, a friend of Yishai, Mishali. He explains he did it like this so the sellers could not throw his name around as having purchased a unit in the project towards advancing the project’s sales.

He explains that he is not buying an additional apartment but changing apartments. He adds the source of the money, 2 million NIS, represents the family’s entire savings. A sizable portion of the apartment has been paid for in the past five years and the remainder will come from the sale of the Har Nof apartment on Katzenelbogen Street.

Yishai adds the purchase was made while he was serving as Minister of the Interior. He states that before going ahead using Mishali as a trustee, he consulted with State Comptroller Micha Lindenstrauss to make certain his actions were in line with the law. The comptroller passed the request to then Attorney General Manny Mazuz, who passed it to then Assistance Attorney General Mike Blass. Blass recommended using a different trustee, which he did, removing Mishali and replacing him with attorney Yitzchak Cohen, who continues serving as his attorney today.

Yishai welcomes any probe, stating the purchase was done in full compliance with the law.