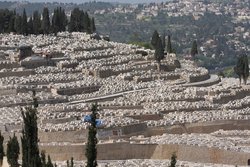 Three chareidi men from Yerushalayim including former council member Shmuel Yitzchaki are in custody. They face an array of white collar charges for selling cemetery plots they did not own in Har Menuchos. They scammed victims into paying tens of thousands of shekels cash for plots in the cemetery that they did not have the right to sell. They also sold fictitious kevarim to bereaved families. A search turned up 500,000 shekels. They are being held without bail at this time.

A gag order has been removed, permitting the publication of the case which involves the arrest of the former councilman and Blisha Shaul. There is a third suspect whose name may not yet be released because he fled the country and is being tracked down with an international warrant.

The arrests followed a complex investigation that took place in recent months by the Israel Police anti-fraud unit in cooperation with Mas Hachnasa Tax Authority inspectors and other tax officials. The investigation was launched after the Chevra Kadisha Council filed a complaint with the Ministry of Religious Services, suspecting some plots had been illegally taken over. The complaint cited some people were buried by people who claimed to belong to a chevra kadisha but they did not.

Six victims of the scandal told authorities that despite requesting a receipt and a certificate of ownership for the plots, they never received any paperwork. Some of the victims have buried their loved ones in one of the stolen plots.

The investigation uncovered that suspects have been working since 2005, selling plots they don’t own to unsuspecting naïve persons, some told the con artists were members of a chevra kadisha. Some or most of the plots sold are in areas that are not designated for kvura. Victims spent 45,000-90,000 for plots, which were always paid for in cash.

Some bereaved families received certificates confirming the purchase for plots to be used in the future, and in some cases, those plots have already been used to bury someone else. The 500,000 NIS in cash was found inside socks in a closet in the home of one of the suspects. Forged documents including certificates and other materials were recovered during the search as well.

In addition to the police investigation, tax authorities are involved. The Jerusalem Magistrate Court extended the remand of two of the suspects until Thursday, 30 Shevat. A decision is pending pertaining to the third suspect.

Yitzchaki was a former Shas Jerusalem Councilman but he was taken out of the lineup in the last elections by Aryeh Deri, replaced with a younger candidate.