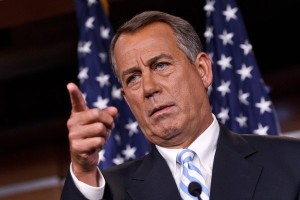 House Speaker John Boehner is defending the invitation to the Israeli prime minister to speak to Congress about Iran.

The speaker also is rejecting criticism from National Security Adviser Susan Rice that the speech is “destructive” to U.S.-Israel relations.

Boehner told reporters Thursday he disagrees with Rice. He says a “bad deal” with Iran on its nuclear program would be destructive, and the American people need to hear from Benjamin Netanyahu.

The prime minister is scheduled to speak to Congress on Tuesday as the U.S. and Western powers engage in nuclear talks with Iran.

Netanyahu angered the White House and Democrats by accepting the invitation from Republicans, who did not consult with the administration in advance of the invite.

Vice President Joe Biden will not attend the speech.