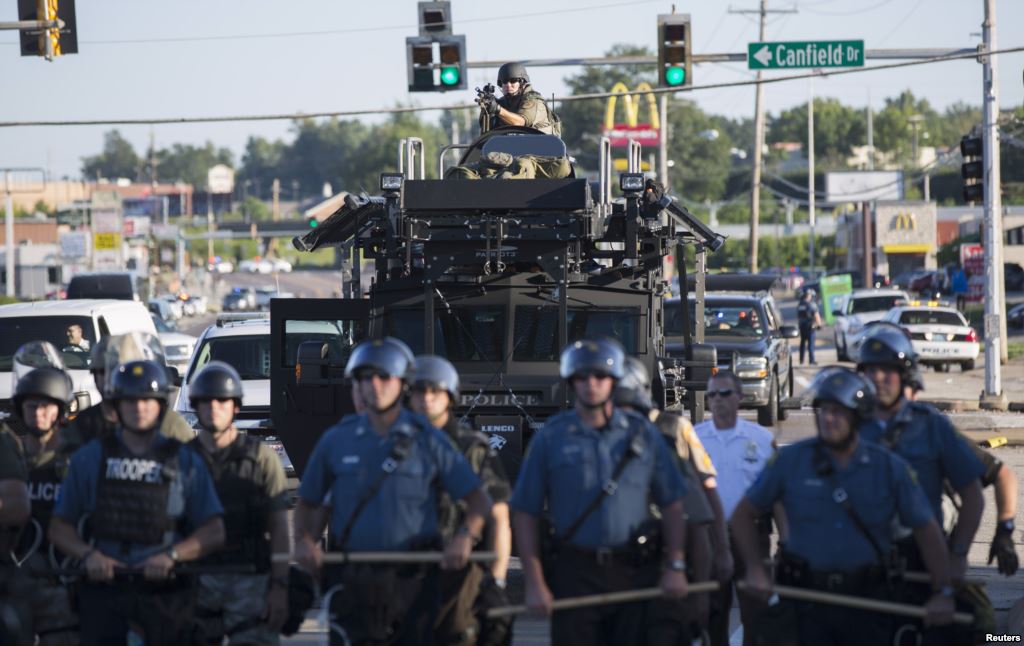 21The killings of unarmed black men by white police officers in Ferguson, Missouri, and in New York City last year touched off protests and a national debate over police conduct that has continued with the recent deaths of black men at the hands of law enforcers in North Charleston, South Carolina, and Tulsa, Oklahoma. A police officer was injured by protesters in New York on Tuesday in one of several demonstrations targeting police brutality nationwide. Here are some recent developments amid the tension between police and communities.

A 73-year-old Oklahoma reserve sheriff’s deputy who authorities say fatally shot a suspect after confusing his handgun for his stun gun was booked into Tulsa County Jail on Tuesday on a manslaughter charge. Robert Bates was released after posting bond.

A video of the incident shows a deputy tackle Harris, who authorities say tried to sell an illegal gun to an undercover officer. A gunshot rang out as the deputy wrestled with Harris on the ground and a man says: “Oh, I shot him. I’m sorry.”

Harris died at an area hospital.

PASSENGER SAYS THERE WAS NO CONFRONTATION BEFORE FATAL SHOOTING

The attorney for a man in the car with Walter Scott before Scott was killed by a North Charleston, South Carolina, police officer said Wednesday his client heard the crackle of a Taser and shots fired but didn’t see what happened.

Attorney Mark Peper said that according to his client, Pierre D. Fulton, there was no confrontation between officer Michael Slager and Scott when Scott was pulled over April 4 for a broken tail light.

Fulton released a statement Monday saying he didn’t know why Scott ran after his car was stopped. Peper said his client has also given a statement to the South Carolina Law Enforcement Division.

Scott was behind $18,000 in his child support payments and family members have said he may have run because he was worried about going to jail.

Dash-cam video released this week shows a police officer in a suburb of Tucson, Arizona, using his cruiser to ram an armed suspect Feb. 19, sending him flying in the air before the car smashes into a wall.

Marana police Sgt. Chris Warren said 36-year-old Mario Valencia robbed a convenience store, broke into a church, invaded a home and stole a car. Warren said Valencia drove the stolen car to Marana, just north of Tucson, where he stole a rifle from a Wal-Mart.

Dash-cam video shows an officer slowly driving behind Valencia as he shoots the rifle in the air. The officer tells others to stay back because the suspect is armed. But within seconds, a different officer drives his patrol car at high speed and rams into Valencia, sending him flying into the air.

The Pima County Attorney’s Office cleared the officer, Michael Rapiejko, of any wrongdoing and he is back on the force.

Valencia faces felony charges, including assault on a police officer. His attorney did not respond to a request for comment from The Associated Press.

High school students blocked a street in Madison, Wisconsin, on Tuesday to protest the death of an unarmed biracial man at the hands of a white police officer last month. Police declared the gathering an unlawful assembly and ordered protesters to leave the street. At least one person was arrested.

Several arrests were reported as demonstrators against police brutality clashed with officers in New York City on Tuesday. Police said an off-duty officer driving home on the Brooklyn Bridge was assaulted by protesters when he got out of his car to investigate. He was hospitalized with injuries to his face and an arm.

Last year, two officers were assaulted on the bridge during a protest over Eric Garner’s chokehold death in the New York borough of Staten Island. Seven people were seen on amateur video pushing, kicking and punching the two officers. Five people were later arrested in that assault.

Last December, Officers Wenjian Liu and Rafael Ramos were shot to death in their squad car in Brooklyn by a man who had made statements on social media suggesting that he planned to kill police officers and was angered about the deaths of Garner and Michael Brown in Missouri.

Organizers said the Wisconsin and New York protests Tuesday were among 28 being held across the country.

Some New York officers have said they feel under threat as protests continue.