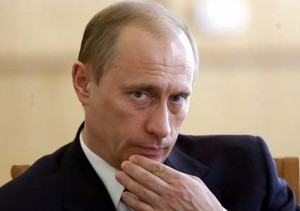 President Vladimir Putin sternly urged the West to respect Russia’s interests in global affairs and defended his move to sanction the delivery of a long-range air defense missile system to Iran during a marathon TV call-in show with the nation Thursday.

Putin scathingly criticized Washington for refusing to see Moscow as an equal partner and warned that Russia-West ties, in shambles over the Ukrainian crisis, could only be normalized when the U.S. and its allies show readiness for compromise.

He also described the killing of top Kremlin critic Boris Nemtsov as “tragic and shameful” and commended police for quickly tracking down the perpetrators, but said he wasn’t certain if Russian law-enforcement agencies would be able to track down those who organized it.

The president focused heavily on economic issues during the four-hour show, a slickly produced annual affair intended to burnish his image.

He received more than 3 million questions before and during the carefully orchestrated show, which involved live feeds from Russia’s regions as well as a studio audience.

People asking about global crises alternated with callers seeking support for industries and agriculture, subsidies for expensive medical treatment, and even advice on personal issues. One group of women asked how to present a dog to a friend with a reluctant husband, and Putin suggested that the friend pretend to drop the request to soften his heart.

On more weighty matters, the president pointed at the ruble’s recent recovery as a sign that the nation had successfully gone through the worst part of economic upheavals caused by a sharp plunge in global oil prices and Western sanctions against Russia over the Ukrainian crisis.

Putin, whose approval ratings top 80 percent despite the recession, said the country can overcome any challenges if it remains united.

“If we preserve a stable situation in domestic politics, preserve the current consolidation of society, we shouldn’t fear any threats,” he said.

Official estimates are that Russia’s economy will shrink by 3 to 5 percent this year in the sharpest decline since 2009, but Putin said the slump would likely be less significant.

Turning to foreign policy issues, Putin said his decision to lift a 2010 Russian ban on the delivery of the powerful S-300 air defense missile system to Iran followed a tentative deal on ending the Iranian nuclear standoff reached by Tehran and six world powers earlier this month.

The president said Iran should be rewarded for showing “a great degree of flexibility and a desire to reach compromise” in the talks. He added the S-300 is a defensive weapon that shouldn’t pose any threat to Israel, and may in fact serve as “a deterrent factor in connection with the situation in Yemen.”

Putin said that Russia would continue to cooperate with its international partners on negotiating a definitive nuclear deal with Iran. He argued that the international sanctions still in place don’t ban the delivery of the S-300, which Russia had halted voluntarily.

He argued that Russia remains open for overcoming the current tensions with the West, but warned Washington that it should stop treating Moscow as an inferior partner if it wants to normalize ties.

“The main condition is to have respect for Russia and its interests,” he said, adding that the United States “doesn’t need allies, they need vassals.”

Asked to comment about Western leaders’ refusal to visit Moscow to attend a May 9 Victory Day parade marking the 70th anniversary of victory over the Nazis, Putin said many of them yielded to Washington’s pressure.

Putin said that despite the frictions with the West, “we don’t see anyone as enemy,” adding that “we don’t recommend anyone to see us as enemy.”

He said Russia expects France to return an advance payment if it fails to deliver a warship built for the Russian navy, but wouldn’t seek any fines. France has suspended the delivery of the Mistral warship amid Russia-West tensions over the Ukrainian crisis.

The Russian leader also criticized Ukraine, accusing it of violating its obligations under February’s peace deal by maintaining an economic blockade on rebellious eastern regions, refusing to deliver pensions and other social payments to people in the east, and shutting financial services to the region.

Putin argued that the Ukrainian leadership is effectively cutting off the eastern regions from the rest of the country. At the same time, the Russian president insisted that he remains committed to cooperating with the Ukrainian president to overcome the crisis, adding that the Minsk agreement signed in February provides the only way out of it.

He reaffirmed a strong denial of Ukrainian and Western claims that Russia has sent troops to back the rebels in eastern Ukraine.

“There are no Russian troops in Ukraine,” he said.

When a jittery resident of areas in southwestern Russia near the border with Ukraine asked him if they should fear a war, Putin answered with a categorical ‘no.’ “You live in calm,” he said.

Asked about the killing of Nemtsov, who was shot dead just outside the Kremlin on Feb. 27, Putin praised Russian law-enforcement agencies for nabbing the suspected perpetrators within days, but said he doesn’t know if it will be possible to track down the mastermind.

The five suspects, all Chechens, have remained in custody. Observers say their arrest has highlighted tensions between Russian law-enforcement agencies and Chechnya’s Kremlin-backed strongman, Ramzan Kadyrov. The investigators have been unable to reach a senior officer in Kadyrov’s security forces suspected of involvement in the killing, who has reportedly remained under strong protection in Chechnya.