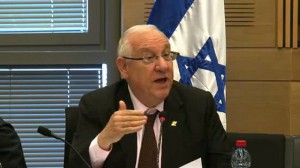 President Reuven Rivlin on Sunday morning 7 Iyar, met at the President’s Residence with the spiritual and community leaders of the Armenian community in Israel, to mark 100 years since the Armenian tragedy. At the opening of the meeting, the President said, “We are morally obligated to point out the facts, as horrible as they might be, we must not ignore them. The Armenian people were the first victims of modern mass killing. We do not seek to put the blame on any specific country, but rather identify with the victims and the horrible results of the massacre.”

The President stressed the importance on the Jewish people’s obligation to remember the massacre, and said, “Today, when the viper of fundamentalism is raising its ugly head once again, we must remember that evil is not the property of any specific religion, just as it is not the attribute of any specific country or ethnic group. We must not allow anyone to make cynical usage of the language of human rights for political purposes. Two weeks ago, we the Jewish people, commemorated Holocaust Remembrance Day. After this horrible Holocaust, commemorating the tragedy of the Armenian people is our Jewish obligation; a human and moral one. I am proud to host you here in the President’s Residence to mark this day with you.”

The Honorary Consul of Armenia in Israel, Tsolag Momjian said, “This is a most historic event today. Armenians all over the world are commemorating the centenary anniversary of the mass killings of the Armenians by the Ottoman Turks. Israel is represented for the first time in Armenia by two Members of Knesset; Dr. Nachman Shai from the Zionist Union and Dr. Anat Berko of the Likud. The Armenian Genocide is not a political case but a moral case. And I want to thank the President for creating this historic opportunity today.”

During the meeting, representative of the Armenian Patriarch, Archbishop Aris Shirvanian, expressed his disappointment that the State of Israel had not related to the killings of the Armenian people as ‘genocide’.

At the end of the meeting, the President stated that he had noted this criticism, and that he believed that Israel’s leadership must do more to raise the issue of the murder of the Armenian people, and stressed the importance of the discussion held today.