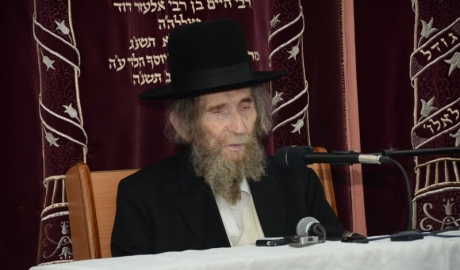 Maran HaGaon HaRav Aaron Yehuda Leib Shteinman Shlita was asked about the tragedy in Nepal, the massive earthquake that has claimed thousands of lives. The posek hador explained “HKBH is certainly trying to communicate with us”.

The rav is quoted saying “We must be mechazeik, but who is paying attention to this?”

The rav’s chavrusa Rabbi Moshe Schneider relayed the Gadol HaDor’s statements. When asked just what does HKBH want from us, the gadol hador is quoted saying “One who wishes to know understands exactly what HKBH wants from us but one who does not really want to know will not understand…”

The Rosh Yeshiva was then asked to comment on the recent video that went viral, showing the Chofetz Chaim ZT”L.

The Rosh Yeshiva added Chazal teach us that the angels danced at the chasenah of Adom and Chavah. [Now smiling] If that was videoed, the wedding with the malachim dancing it would sell for thousands of dollars today.

Rav Schneider added the Rosh Yeshiva was asked about a shidduch for a girl studying in a chareidi college. The rav said the boy should look for another shidduch, adding

The rav was asked if he is concerned the young lady will not find a shidduch, to which he explained he is not worried about her shidduch but if she will find the correct derech and her Yiras Shomayim.