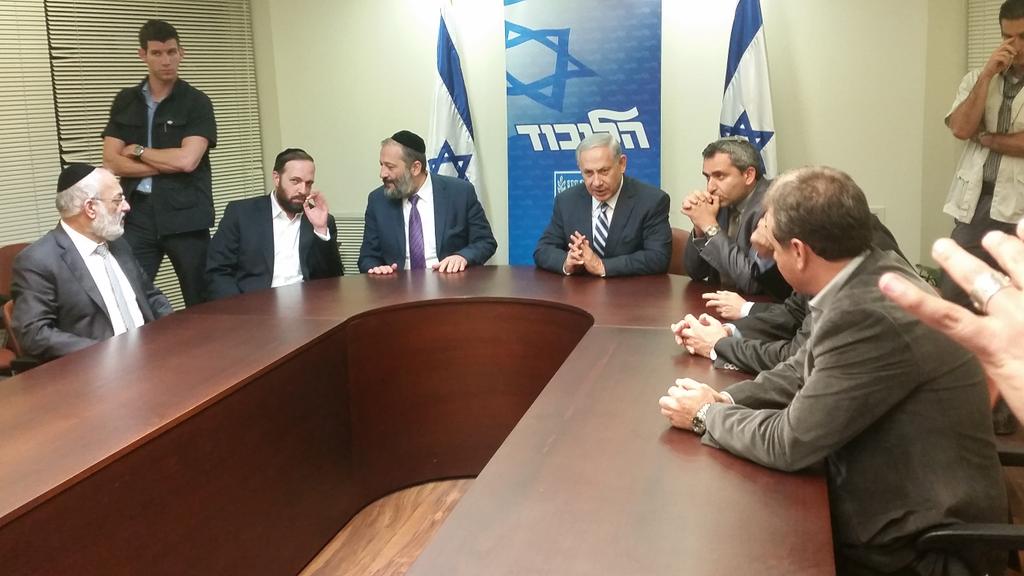 With about 48 hours remaining until the deadline to present a new government, Shas signed onto the coalition headed by Prime Minister Binyamin Netanyahu. Deri proudly announced that he made good on his promises to voters during elections as is reflected in the coalition agreement signed by the party, including the zero value added tax on basic necessities, public housing reform, and increasing minimum wage.

Deri added that a coalition of 61 is small but he is confident it will grow, calling on the Labor party to step forward and join the coalition that will address the social economic needs of the nation.

Shas will control the Ministry of Galil & Negev Development and the Ministry of the Economy. Deri will serve as the minister of both of these ministries. Shas will also receive another ministry which will be headed by Yitzchak Cohen as well as two deputy ministerial slots and head of the Knesset Education Committee. One of the deputy ministers will oversee the District Planning Committee that moved from the Interior Ministry to the treasury and this is why Deri decided not to take the Interior Ministry. Now a Shas deputy minister will have a hand in that committee, which is run by Kulanu, with the latter demanding it to permit moving ahead with its planned reforms in the housing sector.

Shas’ Moetzas Gedolei Hatorah approved the deal. Bayit Yehudi officials are furious over the generosity towards Shas by the prime minister. Avigdor Lieberman, who announced his Yisrael Beitenu party opted for the opposition as he opposes this and other coalition agreements, predicts new elections are not far away, placing the date on 2016. Lieberman feels the deals made to secure signatures on coalition agreements are not in the interest of the nation and the obvious problems that will result will compel early elections sooner rather than later.

Lieberman insists “my word is my word and not just a campaign slogan”, accusing PM Netanyahu of selling out the interests of the nation to secure coalition partners.