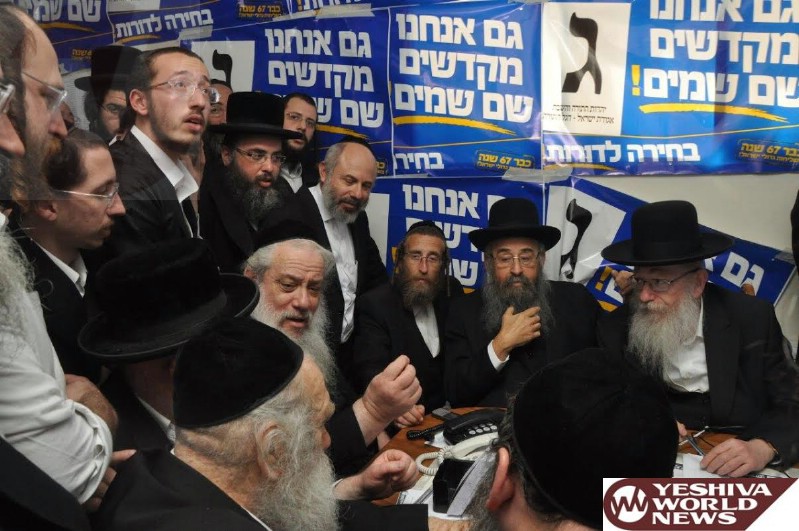 With just hours before the new government is going to sworn in, there is still machlokes among the factions that make up Yahadut Hatorah; Agudas Yisrael and Degel Hatorah.

Degel is demanding 50% representation in the various Knesset committee, an even split with Agudas Yisrael. Degel officials feel they are entitled to this based on the discrimination regarding the number of persons on the party list and various party appointments.

At present Yahadut Hatorah is made up of Yisrael Eichler, Yaakov Litzman, Menachem Eliezer Moshes and Meir Porush, all from Agudas Yisrael while only Moshe Gafne and Uri Maklev are from the Degel faction.

Agudas Yisrael officials’ feel that Degel is only entitled to one-third representation, not half. Agudas Yisrael is willing to agree to 40% for Degel but not 50%.

Adding to the machlokes is the difference of opinion regarding the inclusion of Yesh Atid in the coalition. Litzman this week told the press such a move is out of the question while Maklev told the press he is not ruling out any possibility.

Kikar Shabbos News reports this is all a smoke screen and at the heart of the dispute is Yisrael Eichler’s demands to be appointed chairman of the Knesset Ombudsman Committee instead of deputy Knesset speaker for the second two years of the administration’s tenure. Eichler is the Belze Chassidus’ representative to the party.