Whoever first called the United States of America a melting pot never saw Shaare Zedek hospital in Jerusalem. Not only does Shaare Zedek represent cutting edge medicine in both Israel and the medical world – it personifies remarkable integration of different people.

The hospital combines the ideal of world class modern medical care with Torah true traditions. Walking past the synagogue doing his morning rounds is Professor Petachia Reissman, head of the department of Surgery and a leading innovative in surgical techniques. Inside the synagogue attending one of the three minyanim for Shacharis is a Rav of a shul in Yerushalayim.

Outside on the balcony immediately beyond the shul are two Arab brothers who brought their father into Shaare Zedek whose blood sugar was 515 – very high for someone so thin.

The staff is a microcosm of Israel itself. When Dr. Reissman makes his rounds each morning he is followed by Arab and Israeli medical students. There are Chareidi and Chiloni, side by side and religious Muslim women and not so religious ones all completely dedicated to patient care.

On the fifth floor is a Malon, a hotel, available for family members of patients who wish to stay in the hospital. The rooms are reasonable and very comfortable. The cafeteria on the fourth floor rivals the high-end milchig restaurants on Central Avenue in the Five Towns in the United States. Indeed, the dairy products available in Israel are much more advanced and evolved than those available in the United States.

The hospital is hugely popular throughout the country – and indeed in the middle east. Recently, someone from the United Arab Emirates came to the hospital insisting that his operation only be done in Shaare Zedek.

To address the popularity, the hospital is expanding. Shaareh Zedek treats over a half million patients a year. Two weeks ago the hospital opened a new pediatric wing. The hospital’s remarkable growth and development has been spearheaded by its Director General, Professor Jonathan Halevy.

Under his direction the hospital has taken the lead in research and academic achievement. Its doctors lead seminars in various surgical techniques and medical care via video-conferencing across the world. Dr. Halevy has also overseen the physical expansion as well.

Shaare Zedek has the most advanced PET CT scan in the middle east. After a regular CT may show something irregular, the PET scan placed over the same area indicates whether these spots are “hot” or not. American radiologists who examined Shaare Zedek CT scans and the PET have remarked that they exceed the quality of the equipment of their own hospitals in New York.

On the ninth floor is the Huberfeld Family Neo-natal Intensive Care Unit (NICU). It is one of the most advanced in the world.

Efrat Zaban, who delivered in Shaare Zedek’s maternity ward remarked, “it is one of the friendliest and most advanced maternity wards there are. I was very satisfied.” Shaare Zedek handles over 20,000 births a year. It is popular among every community in Israel. Under the direction of Dr. Halevy, the maternity unit is spearheading research in neo-natal techniques and care. The results are published all over the world.

In the late morning a volunteer from the office of the Rav comes by with three pairs of Tefillin to the patients for those who need. The volunteer is an elderly gentleman from Golders Green who now lives in Bayit VaGan.
The Rav, Rabbi Moshe Flegg, is himself a student of Rav Elyashiv zt”l. Is there a halachic concern about the malacha of kosher – tying regarding the bracelet being placed on a person over Shabbos? Rav Flegg showed the bracelet to Rav Elyashiv himself. Rav Elyashiv permitted it – even for a family member.

On Shabbos the hospital uses “Katvanim” gentiles who perform acts that would otherwise be forbidden on Shabbos. Of course, whenever there is any question of timely issues of Pikuach Nefesh, the halacha mandates that Jews perform the malacha immediately.

Even the snack and drink machines are state-of-the art. They take Kartis ashrai – credit cards as well -something America has to catch up on.

The shul, of course, has Seforim, Tefillin Gemachs, Tallis Gemachs and a Daf Yomi shiur as well. Throughout the day Talmidei Chachomim, patients and family members can be found learning. One Kollel fellow whose son was having an appendectomy was learning Hilchos Treifos. Another Jerusalem resident was working on his sefer.

The food in the hospital is under the Hechsher of Badatz Yerushalayim- Beis Din Tzedek of Jerusalem – from the cafeteria to the coffee machines, to the snack and soda machines.

Shaare Zedek was the hospital that Rav Elyashiv zt”l himself stayed in and was operated upon. Rav Scheinberg zt”l, Rav Avrohom Genakowsky zt”l, Rav Neuwith zt”l, were all treated in this hospital, as were numerous Gedolei Yisroel. At the same time, Shaare Zedek has the most advanced pediatric nephrology units in the world, Pre-Implantation Genetics laboratory, and dozens other units as well. It is also leading the nation and the world in research and technology.

Shaare Zedek is truly an Ohr HaAmim – a light unto the nations. 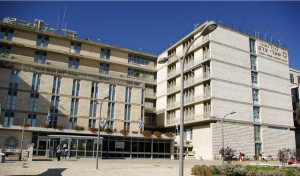