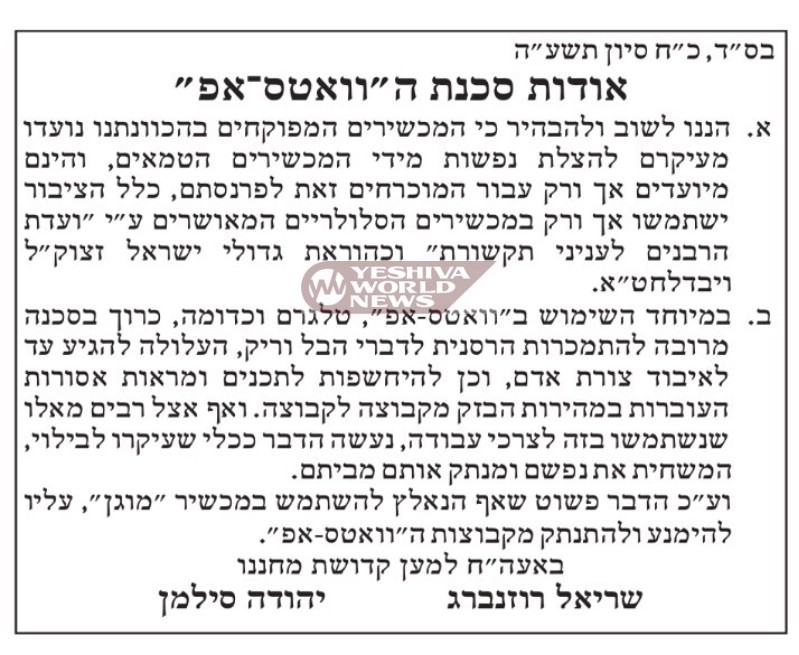 After a number of admorim announced the prohibition of using WhatsApp, a number of prominent dayanim join their call. Dayanim HaGaon Rav Yehuda Sliman (סלימן) and HaGaon Rav Shriel Rosenberg of HaGaon HaRav Nissim Karelitz’s Shlita beis din released a letter on Tuesday, 29 Svan in Yated Neeman and HaMevaser warning against using the program for other than earning a livelihood.

The notice stresses that the tzibur is to use only kosher approved phones. Only persons that absolutely must use the other phones for parnasa may do so.

This applies particularly to using WhatsApp, Telegram and others like it, which are accompanied by destructive dangers to the point one may lose oneself, expose one to prohibited sights, and expose these forbidden sights to one another rapidly via the application. Even among many using the application for parnasa, they too often use it for recreational use too and this leads to the destruction of their neshomos.

Hence the safe thing is to use a protected phone and to avoid or cut off from WhatsApp.

Signed by the two rabbonim.