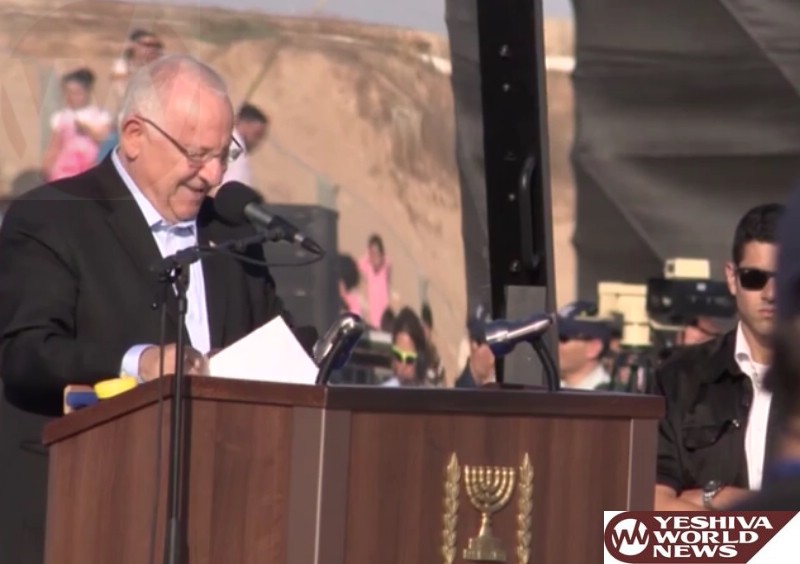 President Reuven Rivlin on Thursday evening 8 Tammuz addressed the graduation ceremony for the graduates of the Israeli Air Force’s (IAF) Pilot Training Course at the Chatzeirim Air-Force base. During the ceremony, the President awarded the ‘wings’ badge to the course’s outstanding graduate (1st. Lt. R), who completed the course as a fighter pilot having initially begun his military service in the Maglan unit before transferring and enlisting in the pilot training course.

The president addressed the graduates and praised them, “You endured all the difficulties and challenges placed before you, you have overcome all the hurdles, touched the pale blue sky and crossed the finish line successfully. For you, the sky is not the limit, it is only the background. Finally – you have your wings!”

The president referred to the changes taking place in our region, and said, “Over the last decade Israel has faced different threats than in the past. The security challenges before us are beginning to take shape. The complex nature of this warfare requires us to respond in different arenas and to difficult dilemmas. The responsibilities placed before the IDF and the IAF are increasing, and the world of military aviation is changing at a dizzying pace. In twenty years you will be leading this force, and it might well by then resemble a science fiction movie. Still, it is important to remember – the plane alone will not succeed in the war, not in defense nor in an offensive attack. It needs someone to navigate its path; outline the objectives and conduct; mark the target, and know how to exercise discretion.”

Mr. Rivlin emphasized how proud he was of the Air Force and in the Israel Defense Forces with regard to the moral strength that was demonstrated during Operation Protective Edge, he said, “Last summer we lost many of our loved ones, and we are still waiting for the return of Oron and Hadar, may their memory be blessed, and the recovery of the wounded. It was then that the IAF once again proved its strength, power, but also its uniqueness. It presented the moral and ideological backbone with which it stands tall. During the operation our pilots avoided attacking when they identified, in the words of one of the pilots “People in the line of fire, perhaps children”. I, along with every other Israeli am proud of the moral strength and combat capabilities of the IAF and IDF.”

The president said that he was moved to take part in this ceremony for the first time since taking office, and added that at such moments he could not help but think of Ron Arad, and the State’s obligation to return him home, adding “Nearly thirty years have passed since Ron Arad fell captive, and the passing of the years have in no way reduced the commitment of the State of Israel to bring Ron home. This is an open wound and an unresolved debt”.

At the end of his speech, the President congratulated the graduates and said, “A heavy responsibility rests on your shoulders. The citizens of Israel relay on you. ‘A man has ascended up high’, Rav Kook wrote. ‘You have wings of the spirit, wings of powerful eagles.’ Spread your wings, soar and return home safely.”