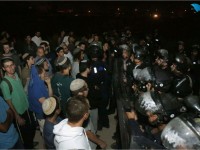 Police arrived in Beit El on Monday night ahead of the planned demolition of Beit Dreinoff, the buildings in the community that were ordered destroyed by the High Court of Justice after the latter determined they built illeally on Arab-owned land. An SMS text message was sent out to supporters early Tuesday morning 12 Menachem Av informing them that police were moving in, calling on them to come and support the resistance.

Hundreds of youths clashed with police as at least 30 people were detained or arrested. Honenu reports police used pepper spray to compel protesters to leave the room they were occupying.

On Tuesday morning additional units moved in to the area as preparations conitnue to raze the homes.

Justice Minister Ayelet Shaked visited Beit El on Monday, telling residents she was working to leagalize the buildings but it appears other agencies are moving ahead to comply with the court order, to have the buildings destroyed by the end of July. The destruction of the buildings will result in two dozen families being displaced.