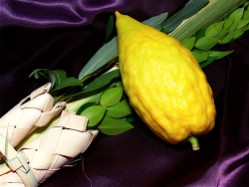 Esrogim that grew on Jewish-owned lands in Eretz Yisroel during Shemittah are endowed with a special holiness known as “kedushas shevi’is”. (1)  [For purposes of this document, we will assume there is no kedushas shevi’is on hadassim from Eretz Yisroel.] (2) Assuming the esrog was brought to market by a reputable Otzar Beis Din, the following guidelines apply:

1. One may purchase the esrog with cash, check, or credit card. There is no need to “pay for the lulav and get the esrog for free”. (4)

During and After Succos

2. As a result of the kedushah associated with the esrog, one must treat it respectfully, and cannot take any actions which will minimize its edibility. At the same time, there is no need to take steps to actively preserve it. (5) For example, the esrog cannot be thrown into the garbage and it cannot be put into a particularly hot place where it will shrivel, but it does not have to be refrigerated.

3. Once the esrog dries out, it has no more kedushah and may be discarded as in any other year.

4. It is permitted to cook an esrog to create esrog-jam. In considering whether to do this (or use other methods to preserve the esrog), (6) one should consider that:

a. There are numerous halachos as to how the esrog can be cooked and consumed, and a Rabbi should be consulted.

b. On the first of Sh’vat (January 11, 2016) the mitzvah of “biur” comes into effect for esrogim. Basically, this means that before or on that date any esrogim or esrog-jam which remains edible must be (a) returned to Eretz Yisroel and (b) declared hefker/ownerless. [If the esrog is shriveled or inedible at that point, there is no need to perform biur.]

FOOTNOTE 2: There are two reasons to justify there not being kedushas shevi’is on hadassim. Firstly, hadassim are not edible, and Yerushalmi (Shevi’is 7:1) is unsure as to whether kedushas shevi’is applies to inedible items which are specifically grown for fragrance. [Chazon Ish, Shevi’is 14:9 rules that one should adopt the strict position on that question.] Secondly, Ohr Sameach (Hilchos Parah Adumah 11:7) suggests that items cut from the ground specifically for a mitzvah do not have kedushas shevi’is; this would apply to all hadassim cut for Succos. [He explains why that principle specifically does not apply to esrogim.] This document will adopt the lenient approach to that question and therefore focus on esrogim; those who adopt the strict position regarding hadassim should apply the coming guidelines to hadassim as well.

FOOTNOTE 3: If the esrogim’s growth and distribution were not overseen by an Otzar Beis Din (and one does not accept the leniencies of the heter mechirah), the esrogim would have kedushas shevi’is, would remain usable for the mitzvah, and the restrictions noted in the coming footnote would apply.

FOOTNOTE 4: When one purchases kedushas shevi’is produce with cash, kedushah spreads to the money (and then to any other item purchased with that money) (Rambam, Hilchos Shemittah V’Yovel 6:1 & 6-7). To avoid this (and to further avoid the prohibition of being מוסר דמי שביעית לעם הארץ) one should either purchase the shemittah produce בהקפה (on credit – understood nowadays to include credit cards and checks) or בהבלעה (subsuming the cost of the shemittah produce into that of some other food, such as by paying for the lulav and getting the esrog for free); for more on this see Gemara, Sukkah 39a cited in Rambam ibid. 6:11, Derech Emunah 6:54, and Mishpitei Eretz Chapter 12 Footnote 15.

All of the above remains true for esrogim that grew without an Otzar Beis Din’s oversight. [This includes esrogim grown based on the heter mechirah, for those who do not accept its leniencies.] However, those halachos do not apply when one purchases Otzar Beis Din produce because the Beis Din does not charge anything for the shemittah produce, and only charges for labor, supplies, and delivery costs associated with bringing the shemittah produce to market. Accordingly, the money paid for the esrog of shemittah is actually payment for items which have no kedushas shevi’is, and therefore no kedushah spreads to the money etc.

FOOTNOTE 6: Poskim discuss whether the esrog may be processed into citron whisky. For more on this see Derech Emunah, Hilchos Shemittah V’Yovel 5:5 & 5:85 and there in Tziun HaHalacha 5:20 and Beor HaHalacha 5:2 s.v. v’lishtos.