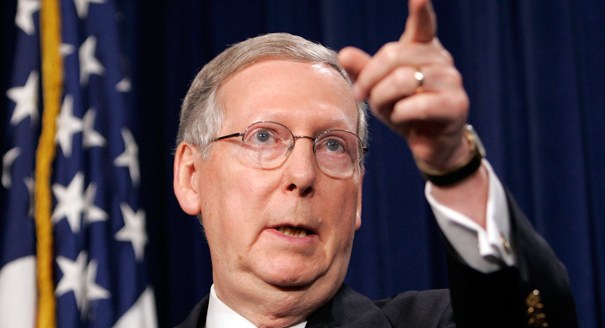 Try as they may, there’s no sign that conservatives chirping over the departure of House Speaker John Boehner will be able to claim Senate Majority Leader Mitch McConnell as their next pelt.

Yet to survive, McConnell will have to maneuver through Republican voters’ anti-Washington sentiments and possibly try to pass spending and borrowing bills this fall that infuriate many GOP constituents.

But some GOP presidential candidates, members of Congress and conservative groups are also making McConnell, 73, a primary target. As with Boehner, they accuse the Kentucky Republican of persistently backing away from fights — despite the fact that Republicans are handcuffed by having just 54 Senate votes, well short of the necessary 60 to end Senate Democratic delaying tactics and the 67 votes it takes to override Obama vetoes.

“Mitch McConnell is infinitely worse as a leader than Boehner. He surrenders at the site of battle every time,” Rep. Matt Salmon, R-Ariz., told reporters last week, after Boehner announced his resignation. Salmon said he texted a fellow conservative, Sen. Mike Lee, R-Utah, “and I said the next guy in the crosshairs is probably going to be McConnell.”

The conservative Heritage Action for America criticized McConnell’s “betrayal of the American people” this summer for planning a vote on renewing the government’s Export-Import Bank. And persistent McConnell critic Sen. Ted Cruz, R-Texas, another presidential contender, has accused the majority leader of lying. Cruz complained Friday about leaders “handing control of the agenda over to Democrats.”

Even so, McConnell seems firmly entrenched as majority leader, a post to which his colleagues unanimously voted him last January as he began his fourth Senate decade. McConnell has spoken to numerous GOP senators since Boehner’s announcement and has not encountered opposition, said several Republicans outside Congress who spoke on condition of anonymity to describe private conversations.

“We support Mitch,” said South Dakota Sen. John Thune, the No. 3 Senate GOP leader. “There’s a high level of frustration out there with what a lot of people perceive to be lack of accomplishment,” but he said voters “ought to be directing their fire at President Obama.”

Sen. John Boozman, R-Ark., said the “the vast majority of the caucus supports McConnell. He was elected with no opposing votes, so that shows some pretty good strength.”

Added Sen. Roy Blunt, R-Mo.: “Mr. McConnell has an incredible obligation here to get the year to a conclusion, he’s a great negotiator, he’s a conservative and I’m sure that senators have confidence in his ability to get some things done.”

Thus, even many House Republicans not openly antagonistic to Boehner would have been hard-pressed to back him if conservatives forced a vote to remove him as speaker, say several Republicans, both in and out of Congress, who cited internal party matters in saying they could speak only on condition of anonymity.

Senators serve six-year terms, so two-thirds of them aren’t facing re-election this year and don’t feel voters’ pressure as keenly as House members. And since senators represent states rather than districts and have a far wider range of voters, they usually espouse more moderate views than representatives.

Another difference in McConnell’s favor: House rules allow a lawmaker to force a vote on removing the speaker, but the Senate has no such mechanism, making it harder to depose a leader.

McConnell has banked goodwill with his colleagues, who credit him with helping Republicans capture the Senate majority for the first time since 2007 in last November’s election. Cruz’s outspoken opposition seems an anomaly.

“Senate leadership positions and the campaigns for those positions are very much an internal thing” among senators, said former Senate Majority Leader Trent Lott, R-Miss. He said Cruz is “kind of a man on an isolated island.”

McConnell has pressed conservative priorities with votes this year that he knew would fail, including one last week curbing most late-term abortions. But with the GOP Senate majority at stake in next year’s elections and five incumbents seeking re-election from moderate states, he’s been adamant about not forcing a fight over closing the government and angering the majority of voters who oppose that tactic.