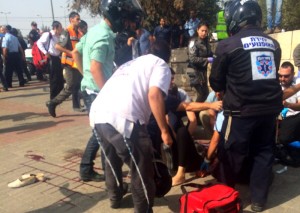 It is a topic that under much discussion in Israel now. What should citizens do after they have neutralized, so to speak, someone who had stabbed and killed Israeli citizens just moments beforehand? Is it immoral to kill them? Are they not still a future threat?

It must be understood that anytime that there is any doubt whatsoever as to whether there still remains a threat, one must be stringent and ensure that he is eliminated. The stabbing in Geulah is a case in point. After the terrorist was shot a few times he continued to get up and remained a threat. Thus, if there is any doubt whatsoever – halachically, one must keep shooting. The question we are dealing with is if it is certain that the terrorist has been neutralized.

In most civilized societies, the law clearly states that a person is allowed to use only as much deadly force as is necessary to neutralize that threat, and no more. If it takes 5 shots to do that, but 6 are fired, that 6th round is excessive force and is not viewed as self-defense. For the first 5, you are safe. The 6th gets you a murder conviction.
Notwithstanding the illegality of it, that sixth shot does occasionally happen. In the United States, the sixth shot is to avoid lawsuits; In Israel, however, it is to avoid future murders by the stabber in question.

Rabbi David Stav, the chairman of the Tzohar association of national-religious rabbis, writes that killing the stabber who has been neutralized is a “moral break down.” This past Tuesday, Rabbi Stav explained his opinion that despite the justified anger at Israeli Arabs targeting Jews, “people who are not involved in murderous activities and those who no longer pose a danger must not be harmed.”
He writes, “These days, when the boiling blood is mixed with civilian willingness and resourcefulness, it’s important to maintain our moral superiority: To avoid harming a person who is uninvolved in murderous activity, and to avoid harming those who have already been neutralized and no longer pose a danger…They deserve to die, but that is not our way. Harming a terrorists who has been neutralized causes double damage: The collateral damage is when these images are distributed, and the main damage is harming our moral norms. We will not stoop down to our enemies’ despicableness, and we will not contaminate ourselves with a moral breakdown.”

I would like to suggest that although illegal, it may, in fact, not be considered a “moral breakdown.” In 1982, I posed a similar question in writing to Rav Moshe Feinstein zatzal.
The question was whether to be halachically branded a rodaif, does the person have to be imminently pursuing killing someone? Or does a past history of doing so combined with current statements also render him a rodaif?

Rav Feinstein’s written response to my question was that technically he would be considered a rodaif but there are three caveats: 1] One may not violate Dina D’Malchusa Dina, the law of the land 2] No harm, or possibility of harm can come to other citizens as a result of that course of action and a third caveat as well. Rav Feinstein concluded that since it was impossible to fulfill these three caveats, it makes no difference practically whether they are officially branded a Rodaif or not.
I would suggest that based upon this letter, Rav Moshe is not in agreement with Rabbi Stav ylctv – that it is considered a moral breakdown. Rav Feinstein did, however, forbid it upon other grounds.

There is further indication that it is not a moral breakdown from the Talmudic dictum found in the Gemorah in Sanhedrin (74a): “Haba lehorgecha hashkaim l’hargo – One who comes to kill you – arise earlier and kill him.”

This passage in Sanhedrin, however, begs a number of questions:

• Is this dictum considered to be halacha? Or is it merely good advice?
• Is it obligatory or is it optional?
• Is there a difference between this concept and the concept of a Rodaif – a pursuer?
• Also, what is the exact source for this dictum? Usually the Talmud appends a verse to a dictum such as this one, and yet here there isn’t one.

Rav Yitzchok Halperin in his Maaseh Choshaiv (Vol. III p.141) writes that it is, in fact, not obligatory but optional. He does not mention Tzror es HaMidyanim as a source, however.
The former Chief Rabbi of Tel Aviv in his Assei Lecha Rav (Vol. IV p.35) follows the view that it is obligatory but qualifies the idea of it being obligatory as only when there is certainty that the enemy will attack. He distinguishes between the obligation of seeing a Rodaif in pursuit of his victim and the law of “One who comes to kill you.”
His distinction is that the latter only applies when it is definite that he will try to kill you. In such an instance, there would be an obligation to kill him.

We do find, however, that in Shmuel I (Chapter 24), King Shaul was in pursuit of the future King David, and would have killed him. Dovid, however, spared Shaul – only cutting his clothing. Certainly, Shaul would have killed him – why then did Dovid spare him, according to the Tel Aviv Chief Rabbi? He should have been obligated to kill him!

HaRav Boruch Dov Povarsky zatzal, in his Shiurim on Sanhedrin cites the Gemorah in Sanhedrin (74a) that the law in regard to a Rodaif is only if it is impossible to stop him in another manner. There is therefore an essential difference between the law of Rodaif and the law of HaBa L’horgecha. If someone is coming to kill you, then you may kill him without worry about stopping him in some other manner, and you are completely exempt. The law of Rodaif, however, limits an observer in killing the pursuer in a number of ways. If he could have stopped him in some other way then he might, in fact, be liable.
The Minchas Asher (Shmos #39) in trying to resolve the question on King David suggests another caveat to the laws of Haba lehargecha, even according to the opinion that it is obligatory. He writes that it is only obligatory to kill him if it is during the actual time when he is trying to kill you. If it is not during this time–then this is optional. The suggestion is somewhat perplexing because all cases of “waking up early to kill him” perforce deal with a case where it is not during the actual time. The “obligatory” nature of it would thus never be practically relevant according to the Minchas Asher.

This author would like to propose an altogether different caveat. The laws of “waking up early to kill him” might be limited by another factor. That factor is the following question: What are the ultimate repercussions of killing this person? If Dovid HaMelech killed Shaul the King, the repercussions would reverberate in Jewish history for thousands of years. That being the case, it would not be obligatory but would be optional.

Our question might be limited by this factor too. What are the ultimate repercussions of killing this stabber? If it may be too devastating then the normally obligatory nature of “arise early and kill him:” changes and becomes optional or in our case, forbidden because of the Law of the Land is the Law.

May Hashem remove the rotzchim and bring us yeshuos and nechamos!