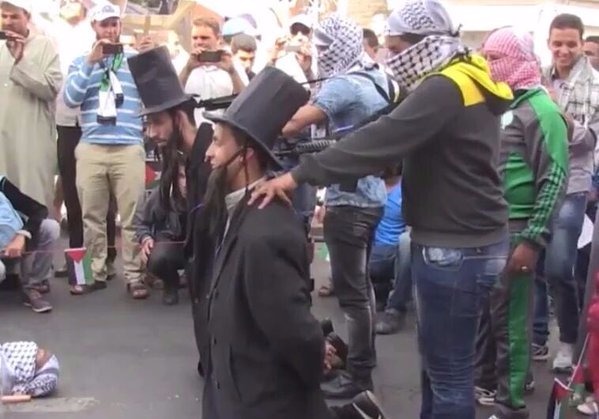 In Casablanca, Morocco on Sunday a pro-Palestinian rally was held with permission from local police. It was certainly not lacking in theatrics as men dressed as Orthodox Jews (more like Abraham Lincoln) were being led at gunpoint by masked men wearing keffiyehs.

The march also featured lots of Palestinian flags, children wearing “blood” stained white sheets chanting “we will sacrifice our souls and our blood for you, Al-Aqsa”, and a giant inflatable model of the Al-Aqsa mosque.

Anti-Semitic expression is relatively rare in Morocco. The king and government of Morocca have actually invested millions of dollars in recent years to the restoration of Jewish heritage sites. In February, the restoration project was honored at an event in Paris attended by French Prime Minister Manuel Valls.

After Israel was established in 1948, some 250,000 Moroccan Jews left their home country in the 19 years following to go to Israel. A few dozen Jews were killed in at least three pogroms that occurred between 1938 and 1954, yet several thousand Jews remain in the kingdom.