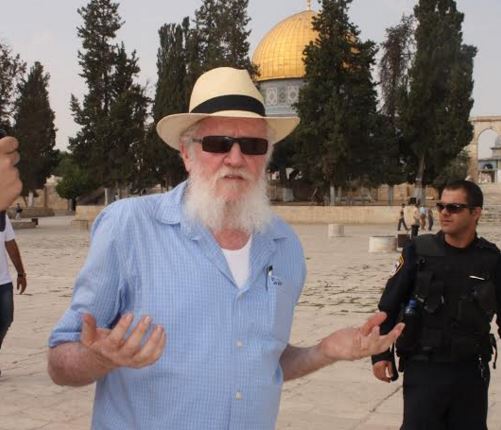 The District Court released unprecedented criticism of the police’s conduct towards Jews visiting Har Habayis. The court spoke of the “slippery slope that may lead to prohibiting one to cover one’s head and lift one’s eyes Heavenward”.

The court accepted the appeal of Honenu and canceled the order distancing Yehuda Etzion from Har Habayis. Justice Winograd ruled the conduct of the police against Jews on Har Habayis is a “slippery slope” and he expressed wonder, stating “Perhaps one may be forbidden to wear a kippa or lift his eyes Heavenward on Har Habayis”.

In discussing the appeal filed by Honenu on behalf of Yehuda Etzion, who was banned from Har Habayis for 15 days for raising his hands towards his face which police interpreted as davening, the court overturned the police decision. Justice Ram Winograd repeated his concerns regarding a “slippery slope” numerous times.

The court was presented with photos and a videos and it was clear that in previous visits to Har Habayis by Etzion, he was not prevented from raising his hands in the exact same way. Attorney Moses explained therefore it is clear police have changed the regulations and if this is so, police must inform persons explicitly.

However, regarding a second person, who was arrested with Etzion, his appeal was rejected for he was charged with telling police he would not listen to their instructions.

Following the hearing Etzion said “From the outset it was clear to me that even within the framework of the shameful status quo, the shameful ban on tefilos on Har Habayis, there is nothing wrong with raising one’s hands. By this act I wanted to express unity with Har Habayis, and I recall the tefilla of Shlomo HaMelech who raised his hands as well. I view this ruling as being very important, and I expect Israel Police to abide by it, to permit entry to Har Habayis and to raise our hands and not make a mockery of the court’s ruling as police do with other court rulings”.