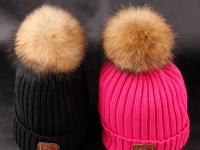 Of late, one of the more popular hat styles is to wear a wool hat with a pompom on it (for women, not men).  The problem is that in a highly disproportionate amount of times, the thread connecting the pompom to the woolen hat is often linen.  This is a Torah violation of Shatnez.

The issue is only a problem if the hat is wool.  If it is made of acrylic it is not an issue.

How can one tell if it is wool?

It will usually indicate so on the label.  Otherwise it might say “Dry Clean Only.”  A third way to tell is the price.

The Torah (Dvarim 22:11) teaches about the prohibition of wearing a wool and linen mixture in the same article of clothing.  This is the meaning of the pasuk, “You shall not wear combined fibers, wool and linen together.”

The term “Shatnez” is actually an acronym for the different aspects involved in processing cloths.

It is a Chok – which means a law in the Torah that we observe.  This is the ratzon Hashem, and we do it.  The Midrash Rabbah on Bereishis explains, however, that Kayin brought Hashem an offering of flax, while Hevel brought an offering of sheep.  Kayin killed Hevel and we therefore observe Shatnez as a reminder of this horrible event – never to mix the two korbanos.

Shatnez is forbidden miDeoraisah – by the Torah when it is worn as a normal garment.

Shatnez not worn but stepped upon is assur miderabanan (eg carpets, car upholstery). It is forbidden when there is the concern that the shatnez may come off and cling to the person’s body.  The hats, if they contain the Shatnez, would be an issur d’oraisah.

Although one should check with his own Rav or Posaik, the prevalence of Shatnez in this case may be such that one should refrain from wearing the pompom wool hats until they are checked.  Some may have linen threads attaching the pompom to the hat, others may not.

It should also be noted that Shaatnez has been found in the furry Russian hats worn by men.