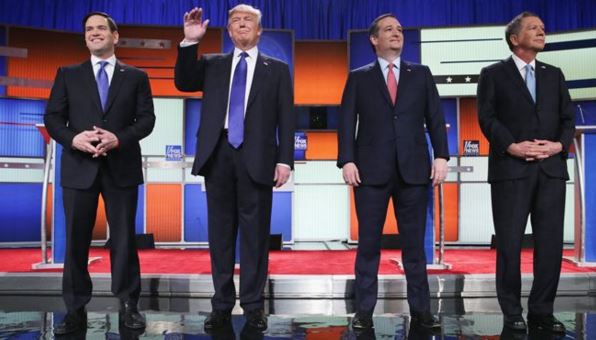 It’s highly questionable whether anyone emerged as the winner in Thursday’s Republican presidential debate in Detroit, though the candidates’ spinmeisters would all quibble with that. There was one clear loser: the Grand Old Party.

The 11th debate of the Republican campaign tested the patience and the limits of viewers and voters. Insults and interruptions overwhelmed sober discussion. The raucous audience, now a staple of the GOP debates, only added to the sense of game-show politics.

Can anyone credibly suggest that the Republicans put their collective best face forward on Thursday night? At a time when the party is in crisis over the possibility that Donald Trump will become the nominee, the debate did next-to-nothing to make Trump or his three remaining candidates look or sound presidential.

Designed to define candidates’ differences, the debates have become tedious and repetitious rather than enlightening or illuminating. No new information was imparted, no truly new arguments advanced. Even the insults have tiresome.

Republican National Committee Chairman Reince Priebus, who drew criticism earlier for trying to limit the number of debates, must be wishing he had pushed for even fewer, given the tone and tenor of Thursday’s forum in Detroit and last week’s mud bath in Houston.

Thursday’s debate came at the end of an extraordinary day in the Republican campaign, a day no one can remember ever seeing, when the party’s 2012 nominee, Mitt Romney, delivered a scathing attack on the 2016 front-runner as unfit to be president and unworthy to be lead the party.

Romney did what none of Trump’s rivals for the nomination has done. He set out a slashing and coherent attack on the New York billionaire. He described Trump as a fraud and a phony, as a failed businessman and an aspiring politician with no ideological moorings. Trump’s policies, Romney warned, would be disastrous domestically and dangerous internationally.

It was left to Trump’s rivals – Florida Sen. Marco Rubio, Texas Sen. Ted Cruz and Ohio Gov. John Kasich – to drive home those arguments on Thursday. At times Cruz and Rubio tried, attempting to unmask Trump on immigration and foreign policy. Meanwhile, Kasich continued his strategy of trying to stop Trump by declining to criticize him.

But then, as if to take a hammer to their own arguments that Trump is not the kind of candidate the party needs to lead them into the fall campaign, Rubio, Cruz and Kasich closed out the evening by saying, however grudgingly, that they could support him if he wins the nomination.

Throughout the evening, Trump only helped reinforce the substance of some of Romney’s criticisms. He deflected virtually every question about policy by launching into personal attacks on his rivals or resorting to generalities and broad promises. He struggled to defend contradictory statements he has made in the past.

In an extended exchange with Fox News anchor and his one-time nemesis Megyn Kelly, he tried to talk away a class-action lawsuit brought against Trump University, dismissing it as minor and predicting that after a few more years of litigation, he will win the argument with the dissatisfied students.

Trump dominated the evening in terms of time spent talking, but he also dominated in time spent on the defensive. Given the pattern of the entire campaign and of the past three debates, he probably did nothing to undermine the support he already has.

It’s questionable, however, whether Trump added new voters to his coalition – voters he might need if the field narrows further. But it’s equally questionable whether Kasich, Cruz or Rubio came out of the debate enhanced or standing above one another.

The Republican Party is in terrible turmoil over Trump’s candidacy, with members of what passes for the establishment frantic to find a way to slow his march to victory. But winning the nomination outright by accumulating delegates in the primaries and caucuses now seems exceedingly difficult for any of Trump’s rivals. The course that seems to have emerged is a collective hold-the-line strategy that would throw the decision to the national convention in July.

Cruz once thought a victory in South Carolina and a big night on Super Tuesday would put him in the driver’s seat. That strategy crumbled when Trump won South Carolina and carried seven of the 11 contests earlier this week. Cruz salvaged the night by winning his home state of Texas, Oklahoma and Alaska. But he has yet to show he can truly consolidate conservatives in the way he needs to.

Rubio had tried to play the long game, but it’s become a much longer game than first envisioned. The Florida senator finally picked up his first victory on Tuesday in the Minnesota caucuses. But on a night when he said the key was accumulating delegates, he fell far behind both Trump and Cruz. In delegate-rich Texas, he managed to come away with just three of the 155 at stake. If that isn’t a failure of his strategy, what is?

Kasich came close in tiny Vermont on Tuesday and finished second in Massachusetts, a whisker ahead of Rubio. In the South, he cratered, scoring in single digits. In some of those states, he trailed Ben Carson, who has since gone to the sidelines with all the other candidates who began the race last year. The lone governor left in the race is still looking for his first victory.

A viable – perhaps tenuous is a better term – strategy for stopping Trump requires all three to win their home states. Cruz has delivered. Rubio and Kasich will be tested in Florida and Ohio on March 15, when delegates can be awarded on a winner-take-all basis. If either loses his home state, the pressure will mount to get out.

It seems that all need one another now to keep gathering enough delegates collectively to deny Trump a first-ballot victory at the convention. Under that strategy, chaos awaits the party in Cleveland, and it was chaos that seemed the order of the night in Detroit. The debates, a proxy for the nomination battle itself, have ceased being the party’s friend.