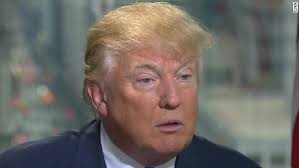 Donald Trump has broadened his judicial objections from an actual jurist of Mexican descent to a hypothetical judge who practices Islam, saying a Muslim on the bench could be biased against him, too.

The presumptive Republican presidential nominee spent much of the past week criticizing the rulings of U.S. District Judge Gonzalo Curiel, who is presiding over a case involving Trump University. Trump told the Wall Street Journal that Curiel’s Mexican heritage represents an “inherent conflict of interest,” because the candidate has proposed construction of a wall along the U.S.-Mexico border. Curiel was born in Indiana.

In an interview that aired Sunday on CBS’s “Face the Nation,” Trump suggested that judges who belong to other ethnic and religious minority groups might also be unable to objectively consider the merits of a case involving one of his companies. This was his exchange with host John Dickerson:

DICKERSON: If it were a Muslim judge, would you also feel like they wouldn’t be able to treat you fairly because of that policy of yours?

TRUMP: It’s possible, yes. Yeah. That would be possible, absolutely.

DICKERSON: Isn’t there sort of a tradition, though, in America that we don’t judge people by who their parents were and where they came from?

DICKERSON: But you’re saying it’s a barrier to him doing his job.

Trump has proposed a temporary ban on all Muslims entering the United States.