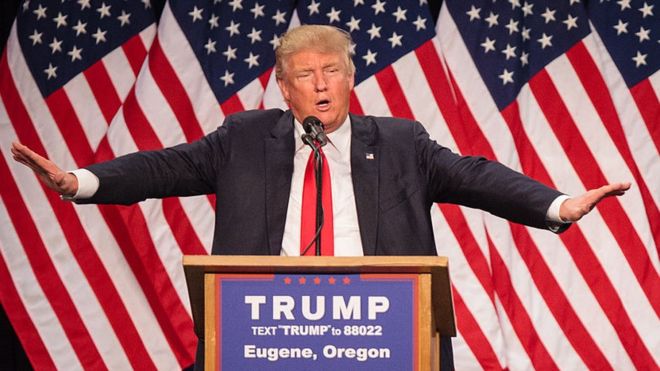 Pop quiz: You work for the government, and you’re passionate about the presidential campaign. Which are you allowed to do:

A: Wear your red hat with Donald Trump’s slogan, “Make America Great Again!” to the office.

B: Forward an email at work urging colleagues to vote for Hillary Clinton.

C: Ask a friend to write a check to Bernie Sanders’ campaign.

Answer: None of the above.

The topsy-turvy presidential race has stirred strong feelings across the country, and Americans are not known for keeping quiet about their political views. But here’s a warning for the nearly 3 million people who work for the federal government: Be careful what you say — and where.

A complex web of restrictions limits political activity by government workers, especially when they’re on the clock. Not all the rules are self-evident, and they vary for different types of employees.

So this year, as the campaign heats up, agencies from the White House to the U.S. Postal Service are trying to educate workers about what they can and can’t do without violating a relatively obscure law known as the Hatch Act. The Office of Special Counsel, an independent federal law enforcement agency, says requests for training at all levels of government are surging.

“It’s not just questions about Donald Trump,” said Ana Galindo-Marrone, chief of the office’s Hatch Act Unit. “I’ve had people want to know what they can do with respect to Hillary Clinton or Bernie Sanders. And the answer is the same for all of them.”

Among the questions that federal employees have posed this year: Can I put “Make America Great Again” in my work email signature? Can I wear my “Make Donald Drumpf Again” hat, popularized by comedian John Oliver, at the office? What about retweeting the presumptive GOP nominee’s flashy tweets from my iPhone when the work day gets slow?

Under the Hatch Act, government employees can’t engage in political activity while they’re on duty or in their office or work vehicle, with few exceptions. In their private time, they’re free to advocate for candidates, donate money, even speak at a rally or fundraiser, as long as they don’t mention their official titles. They can’t solicit or collect donations from others, even on their own time.

The rules cover all workers who fall under the executive branch, but not to members of the military or people who work for Congress or the courts.

Tomas Strouhal, a postal worker from Quarryville, Pennsylvania, wasn’t well-versed in the rules when he put a Trump bumper sticker on the car he parks at work before switching to a mail truck for his route.

It turned out, neither was his supervisor. After another worker complained, Strouhal, 23, was called in and told to remove the sticker or risk being fired, he said. He took it down, but then discovered that he’s actually allowed to have one political bumper sticker on his personal vehicle, even if he parks it at work.

“I definitely didn’t know a bumper sticker could be such a big deal,” Strouhal said. “My first thought was that they violated my First Amendment rights. It’s almost like they were discriminating in a way, too, because a lot of people don’t like Trump.”

The limitations get even more confusing at the higher levels of government. Most workers fall under the “less restricted” category, but some, including those who work for the FBI, the CIA and parts of the Justice Department, are “further restricted,” which comes with rules of its own.

Yet the rules can be tricky for prominent officials like Cabinet secretaries, who are sometimes called upon to campaign for their party’s candidates and are often asked about politics when they appear in public.

“An individual or Cabinet secretary needs to make very, very clear with the campaign or the committee that if they engage, they are engaging in their personal capacity, that their official function or title isn’t going to be something that is used,” said David Simas, the White House political director. “That’s the key distinction.”

Former Health and Human Services Secretary Kathleen Sebelius was found to have violated the Hatch Act in 2012 when she made an off-hand remark at a gay rights group’s gala about who should be North Carolina’s next governor. And Secretary of State John Kerry, answering questions at Oxford University, had to demur last month when a student quizzed him on Trump.

“I’m not allowed under our law to get into, actually full-throatedly, into the middle of the campaign,” Kerry said before moving on to another topic.