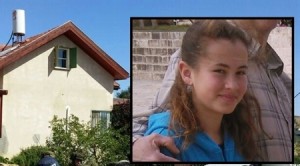 The levaya of terror victim Hallel Yafeh Ariel HY”D, who was murdered when a terrorist entered her home in the Charsina neighborhood in Kiryat Arba Thursday morning, will begin from the family home at 6:00PM. Hallel was asleep in her bed her mom told the media, stabbed multiple times by the 17-year-old Muslim terrorist. The stab wounds damaged internal organs and despite the tenacity of the paramedics and trauma surgeons in Shaare Zedek, she did not recover.

The levaya will begin at the site of the 24 Sivan morning attack and make its way to the Hebron Cemetery. She is being laid to rest next the kever of her father’s first wife, who died of a severe illness.

Eyal Gellman, the security officer of Kiryat Arba and a member of the first response team told Walla News “Her father, Amichai, knew she had been killed and he did not want to leave the house”.

He said “Amichai and two first response members were first into the home. The terrorist lunged at them and Shuki Gilboa was stabbed”. Gellman adds he saw Hallel on the bed in pajamas and the stab wounds were visible, “from every possible angle” he added. CPR was started and they then transported to the hospital.

Gellman explains that as they were still trying to neutralize the terrorist, Gilboa was hit by gunfire and wounded, seriously. “At first we believed the house was locked” stated Gellman, continuing “They engaged him [the terrorist] and fought like lions as clearly the terrorist was going to head to the school [which is next door]. It was a fight to the death. We had no choice but to open fire immediately even though Shuki was hit by the gunfire”.

Commenting on the latest terror attack, Prime Minister Binyamin Netanyahu said, “The horrifying murder of a young girl in her bed underscores the bloodlust and inhumanity of the incitement-driven terrorists that we are facing.

“The entire nation deeply identifies with the family’s pain and declares to the murderers: You will not break us. We will continue to take strong and determined action against terrorism everywhere and at all times. The entire world needs to condemn this murder just as it condemned the terrorist attacks in Orlando and Brussels. I expect the Palestinian leadership to clearly and unequivocally condemn this vicious murder and take immediate action to stop the incitement.

“Enlightened nations must join in this demand. They must pressure the one who heads the network of incitement that leads to the murder of children in their beds and not the State of Israel, which is working to protect its children and its citizens.”