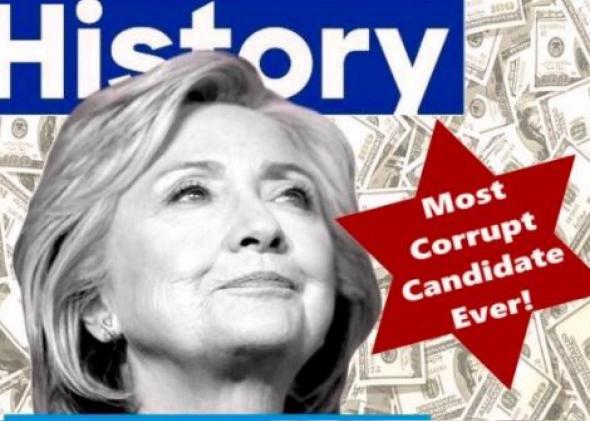 Controversy over Trump’s tweet carrying the image of a six-pointed star similar to the Jewish Star of David became the subject of much scrutiny over the Fourth of July weekend. And Trump continues to face criticism. For readers who may have tuned in sporadically or missed it entirely, here’s a complete timeline of the facts of exactly what happened – starting with the original, now-deleted tweet.

9:37 a.m.: Trump tweeted an image of Hillary Clinton’s face on a background with $100 bills, next to a red six-point star with the text: “Most Corrupt Candidate Ever!” In the tweet, he wrote: “Crooked Hillary – – Makes History!”

For context, Trump tweeted this image amid news that Attorney General Loretta Lynch had privately met with former president Bill Clinton on an airport tarmac in Phoenix for 30 minutes. Both sides said the meeting was a casual encounter, during which the two discussed things like grandchildren and golf – and not about the Clinton email investigation. But it led to sharp criticism from Clinton’s opponents and led to both Lynch and the Clintons looking bad.

The original tweet was retweeted and liked at least 4,174 times.

There was immediate reaction on Twitter, by people noting that the red star was the shape of the Jewish Star of David, potentially carrying an anti-Semitic message.

11:19 a.m.: Less than two hours after the initial tweet, Trump tweeted a new image that replaced the six-point star shape with a circle. This tweet has been retweeted and liked at least 34,236 times as of July 5.

Trump’s critics noticed the change: Erick Erickson tweeted, “For all the people saying “It’s not a Star of David,” why then did Trump tweet it again after replacing it with a circle?”

By the afternoon: There were multiple media reports of the original tweet, the swift criticism and the replaced tweet. The Trump campaign had not responded to requests for comment.

9:27 a.m.: Corey Lewandowski, former Trump campaign manager and now a commentator on CNN, appeared on “State of the Union” Sunday morning and was asked about the image. Lewandowski blamed the media and Erickson’s “never-Trump” campaign, and said Trump’s tweet was “a simple tweet,” with “a simple star.”

“It’s the same star that sheriff’s departments across the country use all over the place to represent law enforcement,” Lewandowski said. “And to read into something that isn’t there is – is – you know what? I think, again, that’s the mainstream media trying to attack Donald Trump for something that really isn’t there. So, they put a new tweet up with a circle. The message is the same. Let’s look at the message. The message is that Hillary Clinton is corrupt and that the FBI is investigating the leading Democratic front-runner.”

10:14 a.m.: Mic.com tweets its article reporting that the image originally tweeted by Trump previously appeared on June 22, 2016, on an Internet message board, /pol/. That report and subsequent reports from other outlets found the image was posted as early as June 15, 2016, by Twitter user @FishBoneHead1.

The Associated Press reported that the account “regularly tweeted out anti-Clinton and right-leaning messages and images.” By the afternoon, the account was deleted from Twitter. The post on the /pol/ message board also was deleted. (As PolitiFact wrote, you can still find /pol/ message thread through an archived website.)

Weigel reported that Trump was cheered on in white-supremacist forums, “for apparently declaring his solidarity through not-so-subtle code.” A quote from his story:

“The evangelicals will listen to his pro-Israel statements, while we will listen to his signals,” Andrew Anglin wrote in the Daily Stormer, a racist site named after Nazi propagandist Julius Streicher’s notorious tabloid. “By pushing this into the media, the Jews bring to the public the fact that yes, the majority of Hilary’s [sic] donors are filthy Jew terrorists.”

By the afternoon: Twitter users circulated images of a sheriff’s badge, noting that there are circles at the end of the corners.

There was no response still from the Trump campaign regarding his tweets, and no response to media requests for comment.

9:42 a.m.: Trump breaks his silence on the star image, saying it’s a sheriff’s star, or a plain star.

Then the Clinton campaign responded. Hillary for America’s Director of Jewish Outreach Sarah Bard said in a statement:

“Donald Trump’s use of a blatantly anti-Semitic image from racist websites to promote his campaign would be disturbing enough, but the fact that it’s a part of a pattern should give voters major cause for concern. Now, not only won’t he apologize for it, he’s peddling lies and blaming others. Trump should be condemning hate, not offering more campaign behavior and rhetoric that engages extremists. The president should be someone who brings Americans together, not someone who sends signals and offers policies of division.”

Our colleague Chris Mooney reported that Trump adviser Ed Brookover said Monday on CNN that “there was never any intention of anti-Semitism,” and that the campaign had corrected the image and planned to “move on.”

“These false attacks by Hillary Clinton trying to link the Star of David with a basic star, often used by sheriffs who deal with criminals and criminal behavior, showing an inscription that says “Crooked Hillary is the most corrupt candidate ever” with anti-Semitism is ridiculous. Clinton, through her surrogates, is just trying to divert attention from the dishonest behavior of herself and her husband. The real questions are, why was Bill Clinton meeting secretly with the US Attorney General on her case and where are the 33,000 missing emails and all of the other information missing from her case – Why are there so many lies?”

The same statement was posted on Trump’s Facebook page, along with a comment from Dan Scavino, Trump campaign social media director, again calling it a sheriff’s star shape:

“The social media graphic used this weekend was not created by the campaign nor was it sourced from an anti-Semitic site. It was lifted from an anti-Hillary Twitter user where countless images appear.

“The sheriff’s badge – which is available under Microsoft’s ‘shapes’ – fit with the theme of corrupt Hillary and that is why I selected it.

“As the Social Media Director for the campaign, I would never offend anyone and therefore chose to remove the image.”

8:56 p.m.: The Anti-Defamation League released a new statement in response to Trump, reading in part: “It’s long past time for Trump to unequivocally reject the hate-filled extremists orbiting around his campaign and take a stand against anti-Semitism, bigotry, and hate.”

7:44 a.m.: Scavino tweeted again in response to the controversy, rejecting claims of anti-Semitism: “For the MSM to suggest that I am antisemite is AWFUL. I proudly celebrate holidays w/ my wife’s amazing Jewish family for the past 16 years.”

2:02 p.m.: Clinton campaign posted a video of Trump’s previous comments relating to the white supremacist David Duke, in an apparent reference to the current controversy.

In his radio interview, Duke praised Trump for his original tweet, and said there was “no way” it was a sheriff’s star, Buzzzfeed’s Andrew Kaczynski reported:

“We have situation right now where Trump is being absolutely pummeled for, guess what, posting a tweeting that shows Hillary Clinton with a big – in the midst of thousands of hundred-dollar bills – a big Star of David, and the words ‘the most corrupt candidate ever,'” Duke said. “And Trump tweeted this: ‘Hillary Clinton the most corrupt candidate ever.’ Now of course, the media immediately came out and said that this was ‘anti-Semitic.’ But of course, it’s all true. We’re not talking about something that’s not true.”

As our colleague Sean Sullivan reported, Trump struggled to move past the controversy four days after it began. He continued to face bipartisan criticism, including from House Speaker Paul Ryan, R-Wis., over his original tweet.

We are not going to issue a rating here, which is another case of Trump retweeting controversial memes without checking the source. Still, some questions remain: Did the campaign initially check at all to see where the image originated? Did the campaign know the potential anti-Semitic message it carried? If the Trump campaign truly believed it was simply endorsing the shape of a sheriff’s star to “fit with the theme of corrupt Hillary,” why delete the initial tweet and replace the star with a circle?

It’s unclear if we’ll get answers to these remaining questions, but we will update this timeline if there are any new developments.