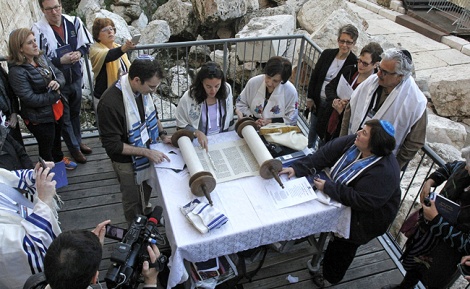 HaGaon HaRav David Yosef Shlita, a member of the Shas Moetzas Gedolei Yisrael spoke out harshly against the Women of the Wall (WoW) organization using terms including ‘pritzus’ and ‘gasos ruach’ (גסות רוח).

In a weekly shiur the rav attacks WoW for its lack of tznius, citing how “they arrive at the Kosel and shout intentionally to draw attention, pointing out their actions are the antithesis of tznius, but rather “pritzus, vulgarity, and gasos ruach, pointing out these women do not have the slightest measure of ‘boshes ponim’ (בושת פנים)”.

Rav Yosef pointed out they are uninterested in fulfilling mitzvos, but more interested in spiting others and not a yearning towards kiyum mitzvos. He added they do not believe in Yerushalayim and lack an understanding of the Kosel and what it means to come and daven at the remains of the Beis Hamikdash, but for them, “it is about coming to the Kosel to anger and out of spite for others”.

“However we will not remain silent…They have long passed the line. There is nothing connecting the religion of the Reform and the religion of Yiddishkheit. One must not sit at a table with them”.