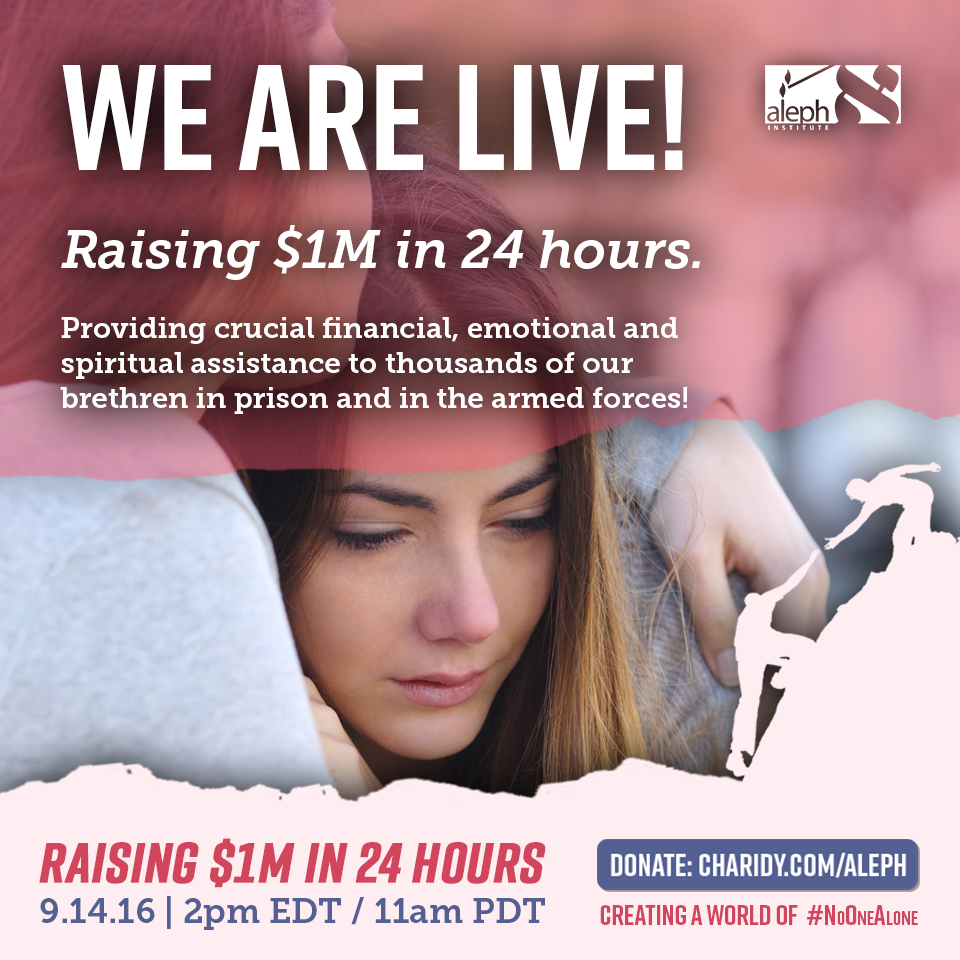 The Aleph Institute is launching its first ever crowdfunding, all-or-nothing, campaign, with the aim of fundraising one million dollars in under 24 hours. The campaign runs from Wednesday, Sept. 14th 2:00pm EDT – Thursday, Sept. 15th at 2:00pm EDT.

The Arora Nash Foundation, Mr. Howard Jonas, and a group of donors, including financier Mitch Julis, have each agreed to match all funds raisedwithin 24 hours, resulting in a three to one ratio. Every dollar donated will be quadrupled! Their commitment is conditional on Aleph raising a total of $1,000,000 in their all-or-nothing campaign, by Thursday, September 15 at 2 p.m. EST.

This campaign, if successful, will result in a one million dollar infusion for Aleph to continue its lifesaving work.

Donations can be made by accessing the campaign page at Charidy.com/aleph.

The Aleph Institute, founded in 1981 by Rabbi Sholom Dovber Lipskar, at the express direction of the Lubavitcher Rebbe, is the nation’s premier Jewish organization providing critical spiritual, emotional and financial assistance for people in limited environments, including thousands of military personnel in the United States armed forces; isolated men, women and adolescents who are incarcerated or institutionalized; and for their families. Aleph’s Project Tikvah helps transform young lives who are in (or facing) prison, as a result of untreated mental illness or addiction.

Living up to it’s mandate, “No One Alone, No One Forgotten” The Aleph Institute’s team of over 30 staff and 400+ volunteers extend a loving hand and a warm embrace to these human beings, who often need it the most.

Since its founding, Aleph has provided 3 main functions, family services, prison services and military services. Acting as an ecclesiastical endorsing agency for the Department of Defense, the Aleph Institute hosts an annual military shabbaton and regular ongoing trainings for military chaplains. Aleph’s prison services division maintains ongoing communications with prison chaplains regarding Jewish practice and holidays and its prison advocacy branch acts to protect the constitutional religious and human rights of its constituents. The advocacy branch, which fields over 1,000 requests per month, also engages in alternative sentencing work and at-risk youth programs (through its Project Tikvah program) that include diversion from prison and securing treatment. One worried mother, whose worries were addressed by Aleph’s team, wrote: “You…. have brought me air when I didn’t know where my next breath was coming from. You have picked up my pieces when I felt feeling whole again was useless. I am not alone because of you and [the] Aleph Institute.”

For the hundreds of families struggling at home, Aleph’s family services division provides financial, emotional, and professional assistance, facilitating much needed stability for the children and spouses of inmates. In addition to sponsoring trips -often across country- for families to see their loved ones, Aleph sent nearly 100 children (with a parent in prison) to summer camps for a meaningful and fun-filled summer.

As a part of its religious services, Aleph distributes thousands of religious items through the year to families, military personnel and prisons, including holiday materials for the High Holidays, Sukkos, Chanukah, Purim, Pesach and Shavous and religious items for year-round. More than 1,000 people participate in Aleph’s Jewish correspondence courses and Aleph’s team of rabbinical students visit over 500 prisons in 45 states in the summer each year. They also arrange and conduct High Holiday services in institutions nationwide.

A recent elderly man who gets no visits from family, and recently received a visit from Aleph volunteers, sent in a moving letter: “Two young students came to visit. With them they brought compassion, kindness, [and] a love that lit up a darkened place. They lit the candles that existed in each of us. They motivated the unmotivated. They made the uninterested become interested. They reminded us by their actions of our great fortune to be G-d’s children. They lifted us up and gave us more to think about. They shared their knowledge on a wide range of subjects. They made me smile so many times..”

“Aleph is, at its core, a reflection of the mission that no one shall be left behind. Whether the need is spiritual, emotional, financial or social, Aleph is the single resource to help those in our communities who are often the most forgotten and alone.” says Rabbi Aaron Lipskar, the executive director at the Aleph Institute.

Says Rabbi Sholom Dovber Lipskar, Aleph Institute’s founder, “ Aleph’s mission is to bring light to the darkest places, where no one else dares to go. We become their extended family for whatever they need from emotional support to financial support to spiritual support…”