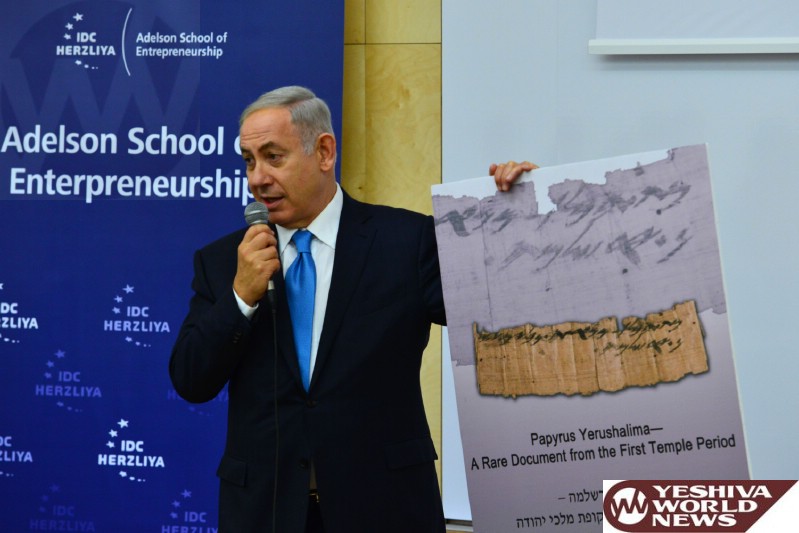 Following is an excerpt from Prime Minister Netanyahu’s remarks made on Wednesday, 24 Tishrei, at the dedication of the Adelson School of Entrepreneurship at IDC Herzliya pertaining to the latest UNESCO decision pertaining the Jewish People and its holy sites. :

“Today, the UNESCO Heritage Committee passed a decision which caused disappointment among the Palestinians and several Arab countries. It was supposed to be passed unanimously, by consensus, because the UNESCO Secretary General said that if it was not passed unanimously, then the decision would not be implemented. I would like to thank the leaders of Tanzania and Croatia for demanding a vote. I spoke with them and I very much appreciate their willingness to take a stand there. Because it reached a vote, it will not be implemented, because it was not unanimous.

“Eleven out of the 21 countries that are members of the Heritage Committee, as they call it, did not support the vote. For Israel, this is a significant result because one year ago, with a membership that was much more comfortable for us, we received a result that was not as good. Countries such as Germany, Japan, India and Colombia left and all kinds of other countries, which are familiar to you entered: Lebanon, more Arab countries, Angola, Zimbabwe, etc., etc., and with a membership that was not as good we came out with a better result. This advances what I have been telling you, and what I told the UN, is happening, that Israel’s bilateral relations will also – in the end – be reflected in international forums even though this will take time. It takes time and a little help from above. I said that it would take ten years, in my mind less than ten years, to break the automatic majority in UN institutions, especially of the bloc of African countries, 54 countries. The decisive majority will go from opposing Israel to supporting Israel. This process is happening and it is also expressed in today’s vote. The change that is taking place is finding expression here. I would like to thank the personnel at the Foreign Ministry, the National Security Council and our UNESCO embassy, who assisted me in my talks with the various leaders.

“Of course, we are trying to change the reality but, even so, the fact that even if this decision will not be implemented, it was raised at UNESCO. This absurdity that we, pay attention, Israel in the Middle East, that it is we who are violating the rights of the various religions, that it is we who are not safeguarding the holy places. Is it possible to conceive of anything more absurd? We are not safeguarding? We are the only ones who are scrupulously, carefully and zealously safeguarding. Who would do so if not us? We all know that is happening here in the Middle East as radical Islam blows up mosques, blows up churches, blows up historic sites, slaughters Yazidis, slaughters Muslims who do not agree with them, slaughters Christians, slaughters whoever it can. Who is deserving of condemnation? Certainly not Israel. Israel deserves all possible praise on this issue, as a beacon of light and progress, tolerance and rights.

“It is UNESCO that deserves condemnation not only for its present blindness but for its past blindness as well. That scandalous decision, the scandal that they decided upon two weeks ago, to the effect that the Jewish People have no connection to the Temple Mount, or to Jerusalem at all, is contradicted by the Bible and the entire historical record. Did you know that Titus was a Zionist propagandist? On the Arch they are carrying, 2,000 years ago, after they destroyed the Temple, it was not a mosque. Islam had not yet been founded; that would take several hundred good years. They are carrying the seven-branched menorah, that you know. And the member states of UNESCO also know it.

“But this distortion, that plasters over the whole notion of historical truth, of history in general, this distortion was covered over by another historical find that was made public today by the Israel Antiquities Authority. This was a document or receipt that was sent over 2,700 years ago from Na’arah [see Yehoshua 16:7], near Jerusalem, and it says in ancient Hebrew, and this is the critical word, but you can see it in Hebrew, ‘[me-a]mat. ha-melekh. me-Na’artah. nevelim. yi’in. Yerushalima’. ‘From the king’s maidservant, from Na’arat, jars of wine, to Jerusalem’. Here is a letter from the past to UNESCO. It is written Yerushalima. It explains – in Hebrew – our connection to Jerusalem and the centrality of Jerusalem. A servant of the king, certainly a King of Judah. It is from over 2,700 years ago – Jerusalem. In neither Arabic, Aramaic, Greek nor Latin – in Hebrew.

“And indeed this absurdity in the theater of the absurd continues, even if with reduced force. Therefore, I have decided to summon home for consultations our Ambassador to UNESCO and we will decide what to do, what our future steps will be vis-à-vis this organization. But it must be understood that in the end, and it will take time, this absurdity that hurts not only historical truth and present truth, but also – in my view – hurts the UN itself, this absurdity will end as Israel’s strength grows and expands.”