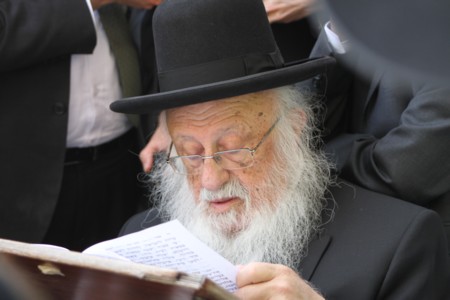 For many years, HaGaon HaRav Baruch Dov Povarsky Shlita has been learning chavrusa with prominent attorney Yaakov Weinroth, who has a yeshiva background and remains frum. Weinroth, who is considered by many to be a genius, is viewed being among the top attorneys in Israel today.

On Thursday, 25 Tishrei, at a gathering of Roshei Yeshiva L’Tzeirim in Bnei Brak, Rav Povarsky addressed the forum explaining the need for tefilla to merit Siyata Dishmaya towards properly understanding Torah. He stated “Years ago a bochur yeshiva named Yaakov Weinroth learned by us in yeshiva and today he is a very well-known attorney.

The rav continued, “He later told me that he met from time-to-time with judges including those serving on the High Court and tries to give them a taste from the limud that we share and they by and large don’t understand a thing. He asked how can this be, that a bochur yeshiva in shiur aleph understands and they do not”.

The rav concludes “The response is a simple one, that the Torah is Toras Hashem and without Siyata Dishmaya there is no chance one will understand a single word”.