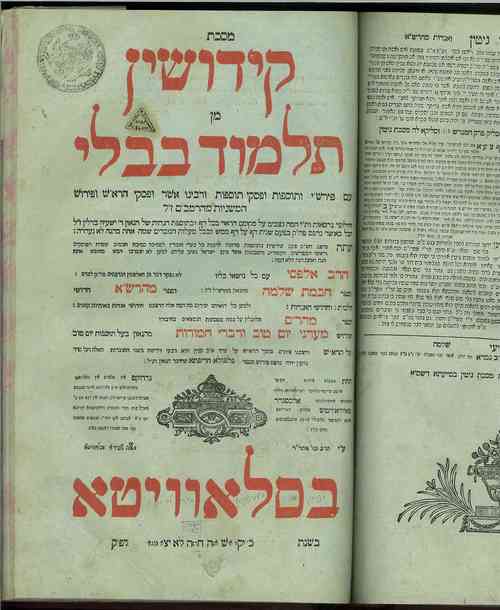 As students of Jewish history know, Jews have lived under three very different groups of Christians. When the Roman Empire fell in 476 CE, Christianity was soon to split in half. The Byzantine Empire, which lasted another thousand years after the fall of Rome, developed into the Eastern Orthodox church.

The Roman Catholic Church also developed independently and soon began to wield significant temporal power as well. Only in the latter sixteenth century did a non-Catholic third type of Christianity emerge from the western church, inspired by Martin Luther. Jews, for centuries a weak minority in the exile, have had to navigate their way between these three different types of Christianity.

THE PRINTINGS OF SHAS

In the mid-sixteenth century, the Roman Catholic Church set its eyes upon blocking the Talmud and began its program of systematically burning copies of it. Notwithstanding the technological advances brought about by Guttenberg and his press, the printing of Shas was limited and curtailed.

But the Torah Jew would not give up.

Jews were aware that in the former Byzantine Empire, the Talmud could still be printed and they utilized the Shas that their Byzantine brethren now under the Ottomans were printing in the presses of Salonika and Constantinople. Soon though, opportunity opened when Polish kings defied the hand of the Polish Church, and the Shas was allowed to be published in the city of Cracow. It was published twice, and unedited by the Catholic Church’s censors—in 1602-1605 and 1616-1620. The Chmielnicki massacres soon took place, but within the next century a further edition of the Talmud was published in Amsterdam. Two more editions were printed in Germany, now that the Germanic lands were no longer under the control of the Catholic Church.

Jewish history and Jewish Talmudic study continued to flow. The Chassidic movement was born, and soon the Pale of Settlement developed. A new edition of Shas was to emerge.

The Slavuta press founded by a son of Rav Pinchas of Koretz, a prominent Talmid of the Baal Shem Tov, at the turn of the century in the Ukraine, arose. His name was Rabbi Moshe Shapira and three editions of the Talmud ensued.

Rav Pinchas Koretz was a descendant of the Megaleh Amukos, and his son too was steeped in in-depth study of the Talmud. Slavuta was in the Ukraine between the Chasidic capitals of Lvov and Kiev. Rabbi Shapira’s printing of the Talmud Bavli in Slavuta also included the Yerushalmi’s tractate Shkalim in 14 pages. Shkalim is the only tractate missing in the Moed section of the Bavli. The Slavuta edition was wildly popular, among a large population of fervently observant Russian Jews.

A Litvish press, however, emerged in Lita. The Romm Press soon published the Vilna Shas, and a fierce competition developed. The Shapira’s claimed that the Romm printing house was in violation of Hasagas G’vul. They had received a Rabbinically approved special license to be the sole publishers of the Talmud for 25 years. Rabbonim on both sides issued rulings and letters. The competition was to last for well over a century, even past the life span of the original Slavuta printing house. Oh, and by the way, the Romm edition had 21 Blatt for tractate Shkalim.

How did the Slavuta Press close? A worker in the printing house, a bookbinder was found dead by the Russian authorities. It is said that this bookbinder had reported to the Russian authorities that the printing house had printed material that the government had not sanctioned. There are two versions – one has it that he was found hanging in the Shul in Slavuta, by apparent suicide. Another version has it that he had fallen in the Slavuta Press and hit his head and died. Regardless, the Shapira’s were taken into custody and tortured severely by the Russians.

[As a parenthetic note, the Steipler Gaon once related to a friend of this author that the bookbinder who had hung himself was the son of a once childless couple, Chasidim of the Shpoler Zeyde, who had received a bracha from Rav Pinchas MiKoretz to have children. The Shpoler Zeidy refused to give the couple a bracha. Ironically, the Steipler pointed out, the two owners who were informed upon were the grandsons of Rav Pinchas MiKoretz.]

In 1836, the Czarist government closed all Jewish printing houses in Russia save two: One in Vilna and one in Zhitomir. The Shapira children and nephews rented the printing house in Zhitomir and were back in business by 1847 completing the printing of Shas in 1864. Romm completed another edition two years later, in 1866. The competition was in high gear.

THE BIRTH OF AGUDAH

In the early 20th century, after Germany had conquered sections of Poland from Russia, the German government asked some of its German Jewish citizens for advice and assistance in now to administer such sections as Warsaw, now under German control. One such expert was Ludwig Haas, a Reform Jew and member of the German Reichstag who had succeeded in doing away with traditional Jewish education and implementing far-reaching reforms in education in his hometown of Baden Germany.

The Polish Rabbis were very concerned and reached out to the Orthodox Jews of Germany for advice and help. Somehow, the German government appointed two Orthodox Jewish experts to assist them, Rabbi Dr. Pinchas Cohn and Rabbi Emanuel Carlebach. These two individuals, of decidedly non-Chasidic lineage, reached out to Polish Jewry and helped them organize. Rabbi Dr. Cohn was able to befriend Haas and changes began to take effect.

Thus, Agudath Israel in Poland, started by two decidedly non-Chassidish Jews in Germany and backed by the Gerrer Rebbe and others, was born. Agudath Israel of Poland was a remarkable experiment. It combined the organizational and logistical talent of German Jewry – of pure Ashkenazic temperament with the masses of voters that Chassidish Jewry would bring to the table.

Soon Agudath Israel of Poland morphed into a political party in the newly formed Second Republic of Poland. It began to take an active role in ensuring that the secularization processes that existed in Russia and in Germany did not develop in Poland too. The Knessiah Gedolah held in Vienna, Austria, featured an idea by a cousin of the Shapiras, an idea embraced by none other than the Chofetz Chaim himself.

Rav Meir Shapiro introduced the idea of Daf Yomi. And in its initial form, it too included tractate Shkalim. But which version? Would the Agudah sponsored program adopt the litvisha Romm version of 21 blatt, or the Chassidish version of 14 blatt?

At first the answer would seem to be obvious. Poland was teeming with burgeoning numbers of Chassidic Jews. The founder of the Daf Yomi, Rosh yeshiva of Yeshiva Chochmei Lublin, was a cousin of the Slavuta/Zhitomir owners. So, yes, the Daf Yomi had 14 blatt allotted for Shkalim. Of that, there was no question.

But soon, the Nazis y”sh devastated Poland, wiping out more than 90 percent of Polish Jewry – more so than in any other country.

A half century after the very first Knessiah Gedolah had passed. Polish Jewry was no more. The once mighty Yeshiva of Chachmei Lubin was now gone, and its building was now used by the medical school in Lublin, Poland.

In an era before the Artscroll Schottenstein and the Mesivta Gemorah, 14 blatt was just too much. In 1975, after seven cycles, the Daf Yomi Commission of Agudah, I am told with the approval of the Chassidish Gedolim, changed Shkalim to 21 blatt. The change was initially resisted by some of the former students of Yeshiva Chochmei Lublin, but to no avail.

Slavuta had lost its final battle.