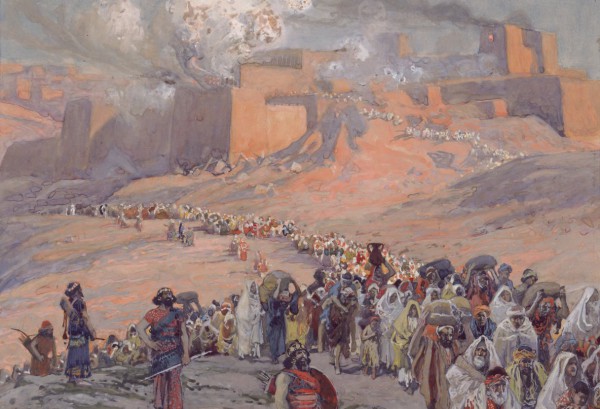 Chazal tell us that on the 10th of Teives, Nevuchadnetzar, the evil king of Bavel began the siege against Yerushalayim during the time of the first Beis HaMikdash. This siege continued for three years until the walls were finally breached on the ninth day of Tamuz. This day, the 9th of Tamuz, was later changed to be commemorated on the 17th of Tammuz, when the walls were breached during the time of the second Beis HaMikdash.

The truth is that there are also two other fast days in Teives, but they are are only observed by the very meticulous. On the 8th of Teives Talmai the King had the Torah translated into Greek. It was a day that Chazal describe as painful as the day of the Chait Ha’Egel. On the 8th of Teives we mourn the loss of Ezra and Nechemia who brought Klal Yisroel back from galus Bavel and helped rebuild a nation.

But it is the entire community who fasts on Asarah B’Teives.

All fasts other than Yom Kippur and Tishah B’Av begin at alos hashachar (dawn). If one had in mind that one was going to rise before dawn to eat, one may do so. However, dawn is generally very early in the summer months so sometimes this is not so practical. In regard to rising before dawn, there is a difference between men and women. Men may only eat more than a k’bayah of mezonos if they began more than 30 minutes before dawn. Otherwise, they may only eat less than a k’bayah (2.2 fluid ounces of the food) (MB 89:27). Women have no such restriction, according to Rav Shlomo Zalman Auerbach, zt”l (Note in Ishei Yisrael 13:71).

All healthy adults should fast, including women (SA OC 550:1). A girl who is 12 years or older must fast, as must a boy who is 13 years of age or older. The minhag of some women to avoid fasting during the three fasts is incorrect and should be discontinued, as it is against Shulchan Aruch.

The Mishnah Berurah (550:5) rules that children who have reached the age of chinuch for mourning should only eat simple foods so that they can participate in the mourning. A sick person should not fast (MB 550:4, 5) even if he is not dangerously ill – a choleh sh’yesh bo sakanah. In other words, as long as he or she is noticeably sick, there is no need to fast.

Nonetheless, that person should not engage in extravagant eating but should only eat moderately.

A pregnant or nursing woman does not have to fast (OC SA 554:5) on the three fasts; only on the fourth, Tishah B’Av. Although the Rema writes that it is the custom for a pregnant woman who has no difficulties fasting to fast, it seems from the statistical data available in Israel that they, too, should opt for the leniency of the Shulchan Aruch and not fast.

If one accidentally ate or drank on the fast day, one must continue to fast for the rest of the day (SA OC 568:1). If one made a berachah on something and remembered after the berachah was recited that it is a fast day, that person should taste a little bit so that he will not have made a berachah l’vatalah.

Showering is permitted on the three fast days because Klal Yisrael did not accept it upon themselves to avoid this.

The Mishnah Berurah (550:6), however, writes that a baal nefesh should be stringent and avoid showering in hot water during a fast day.

In Shacharis one recites Avinu Malkeinu and the Selichos for that fast day. In Minchah, one adds the special “Aneinu” tefillah and Avinu Malkeinu again. If Aneinu was not inserted, the Shemoneh Esreh is not repeated. If someone is not fasting, the Aneinu is not recited.

During the last blessing of the Minchah Shemoneh Esreh the Sim Shalom paragraph is recited instead of the Shalom Rav paragraph.

DIFFERENT THAN OTHER FASTS

Rav Yoseph Karo (Bais Yoseph 550) cites the view of the Avudraham that the fast of Asara b’Taives is different than all of the other fasts. How so? If Asarah b’Taives were to fall on Shabbos (which it doesn’t), it would not be pushed off to another day. It would have to be observed on the Shabbos itself.

Why would this be the case?

The Avudraham explains that it is on account of a verse found in Sefer Yechezkel (24:2), “On that very day..” which equates this fast to Yom Kippur. Rav Karo states that he does not know from where the Avudraham derived this. Rav Karo further notes that the tenth of Taives will at times fall on a Friday, but none of the other fasts ever do. In Shulchan Aruch itself (550) Rav Karo rules that none of the four fasts set aside Shabbos (This is also the view of the Rambam Hilchos Taanis 5:5 and Rashi in Megillah 5a “Aval Zman.”), but we will deal with the view of the Avudraham in this essay.

We must also try to understand why it is, according to the Avudraham, that Asrah B’Taives is different than the other fasts, and why the Avudraham chose to state this difference regarding Shabbos when he himself writes that it never actually falls on Shabbos!

Also, notwithstanding that the fast appears in Tanach – at the end of the day, it is a Rabbinic enactment. Oneg Shabbos, enjoying ourselves on the Shabbos, is according to most Poskim – a Torah obligation!

Why then would Asarah b’Taives set Shabbos aside?

A look at the great commentaries reveals that there are four approaches to understanding the Avudraham’s unique perspective on Asarah b’Taives. Not all of the commentaries were addressing the Avudraham himself, but they certainly did address the notion of how Asarah B’Taives may be unique. Let’s explore them.

Asarah B’Taives marks the siege on the holy city of Yerushalayim that ultimately led to its destruction, the destruction of the Bais HaMikdash and the exile of Klal Yisroel.

From the Yaaros Dvash (written by Rav Yonasan Eibeschutz in Volume I Drush #2 for Tisha B’Av) we see that the seeds to three tragedies, the destruction of Yerushalayim, the destruction of the Beis HaMikdash, and the exile, all lie within Asarah B’Taives. Each of these different tragedies in and of themselves would be enough to mourn about. Imagine then – all three of them combined! This is why Asarah B’Teives would be different.

Beginnings are very stringent – even more so than the end-result. Aside from the fact that Asrah B’Taives is the seed to three tragedies, the fact that it is the beginning of the loss of the Bais HaMikdash is a reason to mourn.

The Bnai Yissaschar (14:1) proves this point from the fact that we mourn the destruction of the Bais HaMikdash on the ninth of Av – not the tenth of Av – even though the majority of it burned on the tenth.

Another explanation to the Avudraham is found in the Chsam Sofer (Toras Moshe on Zayin Adar). He writes that all the other fasts commemorate a terrible tragedy that the nation of Israel incurred.

Not so the fast of the Asarah B’Taives.

The Chsam Sofer writes that Asarah b’Taives is the one fast that we have to help prevent a tragedy from occurring. It gives us an opportunity to determine whether the state of being without the Bais HaMikdash will continue. This type of fast is actually a beneficial one – where we have within our hands to rectify an error. When we are given such an opportunity it is a joy – an Oneg. That being the case, we can well understand why the Avudraham writes that if it were to fall on Shabbos we would still fast – it is a joy.

There is a third possibility in how to understand the Avudraham. Rav Yoseph Babad (1801-1874), author of the Minchas Chinuch, explains (301:7) that the nature of all of the fasts is that they can be celebrated in the general month in which the fast had occurred.

We find this idea expressed even earlier by the Ritvah (Rosh HaShana 18b), that the Neviim were already aware of the future destruction that would happen a second time and therefore ordained the fasts as approximate – in other words they may be observed in other days of that month, such as the Sunday following Shabbos if need be.

Rav Chaim Soloveitchik in fact proposes this very understanding in the words of an earlier authority that he quotes (Chiddushei HaGraZ Stencils p. 27 #44). One can possibly attempt to place Rav Soloveitchik’s words in the Avudraham, but the actual reading may be somewhat difficult. Curiously, Rav Chaim writes that he is explaining the words of the BaHaG, but the BahaG does not actually discuss the issue at all.

Both according to the Minchas Chinuch and Rav Chaim Soloveitchik one can make the following observation:

In general, fast days would normally not set aside Shabbos were it not for the fact that they could be celebrated on another day in that month.

Rav Meir Simcha of Dvinsk (Ohr Sameach Hilchos Taanis 5:6) tries to bring proof to the position of the Avudraham from a passage in the Talmud tractate of Eiruvin 40b. The Talmud poses the question of whether someone who is observing a private fast on a Friday finishes the fast until the stars come out on Friday night well into Shabbos. Rav Meir Simcha points out that the Talmud could have posed the same question in regard to a regular public fast. The only regular public fast that falls on a Friday is the 10th of Taives.

Backing up Rav Meir Simcha is the notion that the Shulchan Aruch OC 288:5 rules regarding when one fasts on account of a bad dream that one may fast on Shabbos. Thus, the Shulchan Aruch rules in (249:4) that one certainly does fast until the stars come out on Friday night – it is a Kal vachomer argument!

It is interesting to note that the Biur Halacha in 249:4 states that Rav Karo’s position (but not the final halacha for Ashkenazim) seems to indicate that he would only rule in this manner for a fast of a bad dream but not for the 10th of Taives. However, numerous Sefardic authorities disagree with his reading of Rav Karo (See Yechaveh Daas Volume I #80).

Ultimately, of course, the halacha is not like the Avudraham. However, we can still derive remarkable insight and inspiration from all four of the explanations to his words. We should contemplate the words of the Yaaros Dvash that Asarah B’Taives encompasses all three tragedies.

We can be inspired from the fact that, according to both the Yaaros Dvash and the Bnei Yissasschar, beginnings do matter and they matter enormously. They carry within them messages of tremendous import.

The idea that the Chsam Sofer presents of Asarah B’Teives being unique in that it is an opportunity to change the course of our future is also something that should be welcomed. Finally, one can also learn much from the opinions of the Minchas Chinuch and Rav Soloveitchiks that the fast days are indeed very weighty, and at least according to their view, they would even set aside the Shabbos itself were it not for other factors.

We should utilize all of these explanations to help add vitality to our observance of the fast days in general and Asarah B’Taives specifically.