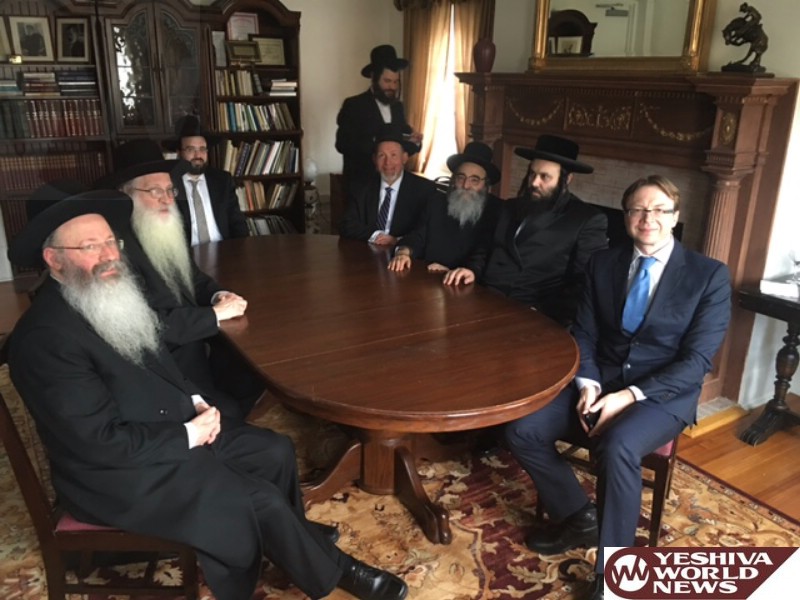 A delegation of American Jewish leaders met last Wednesday with Lithuanian Ambassador to the US, Rolandas Kriščiūnas in an effort to forestall planned development in the old Jewish cemetery in Vilnius.

The cemetery in question (‘Shnipishok’) dates over five centuries and while the Nazis cleared the cemetery of all tombstones and grave markers, many thousands of graves remain untouched beneath the ground. During the Soviet occupation, a Sports Palace was built on the cemetery grounds.

Further desecration took place in 2005 and 2008 when two apartment complexes were built in the cemetery, with extensive exhuming of bodies and desecration of the dead.

A current project threatens further desecration. Lithuanian authorities are planning to erect a Congress and Convention Center which will be located at the now-derelict Sports Palace, and it will undoubtedly necessitate a great deal of excavation and exhuming of skeletons and human remains. The proposed center itself will permanently desecrate the sanctity of this sacred site.

Worldwide protests, including an electronic petition which drew almost 40,000 signatures, called on the Lithuanians to select any of a number of alternate sites, so far to no avail.

The delegation visiting Ambassador Kriščiūnas was headed by Rabbi Osher Kalmanowitz, Rosh Yeshiva of the Mirrer Yeshiva in Brooklyn, Rabbi Malkiel Kotler, Rosh Yeshiva of Beth Medrash Govoha in Lakewood, and Rabbi Yakov Ber Teitelbaum who represented his father, the Grand Rabbi of Satmar, who heads a following of several hundred thousand adherents.

Rabbi Kotler and Kalmanowitz are both descendants of Lithuanian Jewish families and the Ambassador was impressed to learn that their respective Yeshivos are among the leading Torah centers whose educational philosophy follows the Lithuanian tradition. Both, Rabbi Kotler and Kalmanowitz, have travelled twice to Vilnius to meet with government officials in an effort to protect the cemetery’s integrity.

Also present were Rabbi David Niederman, president of the United Jewish Organizations of Williamsburg and North Brooklyn, who organized the meeting, and Rabbi Pinchos Hecht, Executive Director of the Mirrer Yeshiva.

The meeting coincided with press reports that the Lithuanian government recently cancelled the solicitation for bids for the Congress Hall project, due to irregularities in the process. This, combined with a change in government, raised hopes for a more favorable outcome.

In its plea, the group spoke of the sanctity of the site, and called for its protection by a Lithuanian government acting in accordance with the norms of an enlightened democratic government.

Rabbi Niederman, summarizing the outcome of the meeting, said that: “Ambassador Kriščiūnas and his staff showed an interest in the concerns that were shared.”

“The reception was certainly different than prior meetings, and we were encouraged to hear that the government is currently reviewing its options. The Rabbis expressed the readiness of worldwide Jewry to restore the cemetery and beautify it, as is appropriate for such a historic site, which is a testament to the Jewish-Lithuanian joint heritage,” Rabbi Niederman concluded.