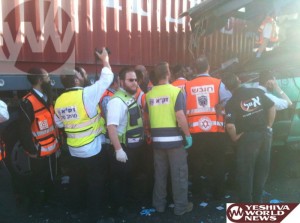 [Click HERE for photos] Following all the confusion and contradictory reports, the death toll from the Thursday bus crash on Route 85, the Akko-Carmiel Road is five, including two chareidim, from Haifa and Tzfas.

The victims have been identified as Captain Aviv El-Dan, 25, an IAF officer from Carmiel; Major Saleh Abdullah, 42, an Israel Prison Authority officer from Kisra in the Western Galil; Zohar Zehavi, 56, from Haifa; Sgt. Inna Svardelov, 21, from Tzfas and 62-year-old Asher Nidam, also from Tzfas. Dozens of people were injured, and some remain in hospitals on Friday morning, with a number listed in serious and moderate condition.

The Egged driver, a 25-year-old resident of Sajur, an area Druse community, appears to be at fault according to the preliminary investigation. The driver of the truck, which was parked as originally reported, Kamal Taha, explained to police that he parked his truck on the side of the road, legally, to assist another driver, and suddenly, the Egged bus crashed into it, peeling away the right side of the vehicle.

HaMevaser reports the driver has only been employed by Egged for a number of months and has accumulated a number of violations for tailgating and unspecified safety violations. As a new driver, he was followed on some of his route by Egged inspectors, who documented some of his violations, failing to adhere to company safety norms.

Police are still not ruling out that the truck was stopped illegally, and in a dangerous fashion that may have created a hazard that turned into the fatal crash.

The bus driver sustained light injuries, and he was taken into police custody. A decision is expected on Friday if police will request to extend his remand.