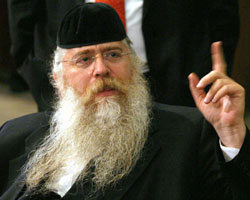 Deputy Education Minister Meir Porush on Sunday made a visit to Ashkelon, meeting with the southern commander of Israel Police, who briefed him on the logistics surrounding the operation to exhume the bones at the Barzilai Hospital location.

Porush then visited the actual archeological site, observing dozens of Israel Antiquities Authority (IAA) officials as they continue exhuming the bones, stating “this is most difficult to observe”, adding “we remember from past incidents just how IAA officials remove bones”.

Porush feels it is irrelevant if the bones are those of non-Jews as is presumed, or those of Jews, insisting gedolim shlita prohibit moving them and that means the dead mustn’t be disturbed.

Porush stresses that making things worse in this situation is the reality that an alternative exists, one that does not compel exhuming kevarim.

Regarding the protests, he explains “our response must be formidable and immediate”, expressing disapproval of violence but warns “I did not order the protests and I cannot say when they will stop or where they will go”.

“The events taking place must and will be presented to Gedolei HaTorah Shlita, and ultimately, they will decide what actions we are compelled to take…It appears that the prime minister feels for a moment that joining the anti-chareidi momentum will help his image. This is most unfortunate”.

2:10PM IL: Mounted police move in at to remove protestors from the hospital area in Ashkelon. Police have also set up checkpoints, stopping vehicles and buses of protestors heading to the hospital construction area from portions of the country. Back in Jerusalem, Yassam anti-riot police are operating in Meah Shearim, preventing tens of protestors from making their way to Kikar Shabbos and other areas where they have been disrupting traffic. Similar protests are reporting on other area streets as well.