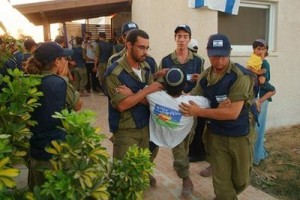 As the summer months approach, bringing yet another anniversary of the painful and shameful 2005 expulsion of Jews from their homes in Gush Katif and N. Shomron, many are asking the obvious, including Rabbi Bentzion Grossman Shlita, of Migdal HaEmek, who is quoted in an “SOS-Israel” publication questioning “Where was the chareidi community during Gush Katif,” when the shuls, yeshivos and study halls were bulldozed, when the graves were exhumed without protests from Atra Kadisha and others.

“Immediately following the Six Day War the Lubavitcher Rebbe warned, over 43 years ago, that each land concession will lead to additional concessions and bloodshed. He shouted in a loud voice to the chareidi parties willing to make land concessions, warning them hundreds of times that ultimately, they will hand over Yerushalayim R”L. I am in shock as to how frum Jews can take part in such awful unprecedented actions.

“Who would have believed two years ago that construction would be frozen in Ramat Shlomo or that buildings would be demolished in Modi’in Illit and building halted in Betar Illit? On the eve of elections in an interview with SOS-Israel I warned of the lurking dangers. Unfortunately, the warnings are coming true because the words of a Tzaddik of the generation like the Lubavitcher Rebbe are not empty words. What remains to be done is that all the rabbonim and askanim must get up and act to halt the talks, talks that will chas v’sholom lead to additional concessions…”

“There is no doubt that we must reflect and do a chesbon nefesh and we must realize the words of the Lubavitcher Rebbe ZT”L were truly prophetic. We must strengthen our adherence to Torah and Mitzvos… for in the end, the dangers will reach all of us”.

Amid weeks of protests and escalating violence and vandalism surrounding the bones at Barzilai, there is an innocent yet pained and angry voice that is becoming increasingly audible, seeking answers, why the chareidi world remained silent while shuls and cemeteries were destroyed.

The critics today point out that in Gush Katif there was no dispute as to the bones, with everyone aware they were the bones of Jews interred in the Holy Land, yet the rabbonim and Atra Kadisha did not concern themselves with the kovod of these remains. There were no protests at Kikar Shabbat and no trash receptacles burned on Shmuel HaNavi Street, since these were the bones of the ‘settlers’ and there may not have been political gain to be sought by protesting, some lament.