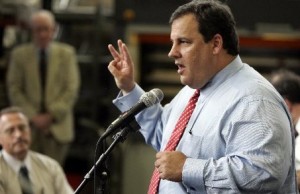 More than 30,000 angry New Jersey residents including union employees and community activists, marched to the state capitol Saturday, delivering a blistering message to the governor in an effort to protect their turf and their paychecks.

The emotions matched the size of the biggest crowd state police had seen in years, with signs calling Governor Chris Christie the biggest loser, a liar, and someone who duped them.

Christie is the crosshairs for a budget that slashes funding for education and aid to cities and towns, while mandating unpaid state employee furloughs.

New Jersey residents already own the highest tax burden in the country, so the governor has taken future tax increases off the table. With a multibillion dollar deficit, he says there’s no other option other than to cut spending.

On Saturday, Christie defended his spending plan and then went on the attack, asking why teachers won’t contribute towards their health insurance or give back raises when the economy is hurting.

“The state can no longer afford this, the localities can’t afford it, and they’re protesting not in anybody’s interest other than their own self-interest,” Christie said.

Back at the rally, there was plenty of rhetoric – but few solutions on funding sources.

The proposed budget is $29.3 billion dollars. New Jersey is required by its constitution to pass a budget by July 1.