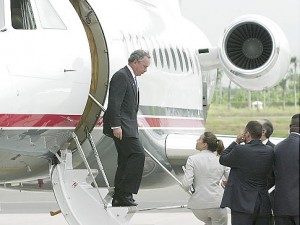 When Mayor Bloomberg wants something, he has plenty of tools to help him get it – friends in high places, a bully pulpit, six-figure donations to political parties and money for influential city nonprofits.

One of his most prestigious and mysterious perks, however, has two wings and three engines.

Bloomberg refuses to talk about the Dassault Falcon 900s in his private air fleet, which shuttle him and his entourage around the globe.

The jaunts may be a trifle to a billionaire, but for those who’ve flown Air Bloomberg, it’s a tantalizing taste of luxury – and a world away from taking off your shoes at security.

In 2002, Bloomberg famously brought Assembly Speaker Sheldon Silver and then-Senate President Joe Bruno to his Bermuda home for a weekend, taking them for rounds of golf to try to break the ice. Each dutifully reported the trip on his annual state disclosure form, which specifically asks about paid travel.

In 2008, Bloomberg took City Council Speaker Christine Quinn to a conference in Belfast on his jet, while then-Controller William Thompson and then-Public Advocate Betsy Gotbaum had to fly coach.

Then last week came word in a New York magazine profile of Police Commissioner Raymond Kelly that “Bloomberg gives Kelly lifts on his private jet. Bloomberg goes to Bermuda. Kelly and his wife get off in Florida, where they have a weekend retreat.”

Bloomberg’s spokesman declined to comment on the trips, and Kelly’s spokesman didn’t respond to a request for comment.

No trips are listed on Kelly’s disclosure forms back to 2004, the oldest available.

The Conflicts of Interest Board declined to comment. In one of its advisories for city employees, though, the board offers this guidance: “If the gifts from the superior to a subordinate start to get fairly regular and extravagant, people may begin to wonder what kind of silence the superior is attempting to buy.”

Bloomberg is a big fan of putting out information, except when it applies to his own operations, saying just last week: “Disclosure is the thing that keeps us free and keeps government honest.”

We only know about Kelly’s and Quinn’s trips because they mentioned them to reporters. Who else is in the mayor’s debt after taking a free ride on Air Bloomberg?