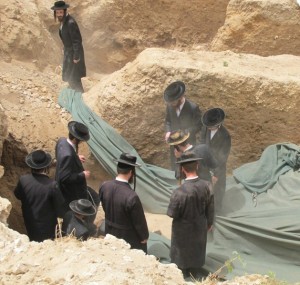 It appears the growing boycott by the chareidi community against the Electra Company may have succeeded in persuading the company to seek a solution surrounding the excavations in Jaffa.

YWN-Israel recently reported that Electra, a manufacturer of air conditioners and other appliances, is a parent group to Electra, the real estate developer, prompting the boycott.

On Thursday, an Israel Antiquities Authority officials on the scene at the Jaffa excavations announced the work would be halted, but about an hour later, it was learned that his statement was not a truthful one.

Later in the day, Eida Chareidis affiliated rabbonim began exerting pressure on Electra corporate officials, warning of a chareidi wide boycott on all its products. According to a Kikar report, the Eida gave Electra officials a Thursday night deadline, warning at that time, the boycott will become an official policy, with all of the accompanying ramifications.

Electra officials met in urgent session, also conferring with Israel Antiquities officials to get an update on the Jaffa excavations. The decision was made to halt the excavations, and the rabbonim were notified. Perhaps company officials did not wish to have their lucrative air conditioning market targeted in a boycott ahead of the summer.

Chareidi lawmakers calling for a halt of the excavations in Jaffa pointed out that the ongoing work is a gross violation of coalition agreements. In addition, even according to those who accepted the pikuach nefesh explanation in Ashkelon, where a fortified hospital unit is set for construction, the same is not the case in Jaffa where it is a simple matter of real estate development and profit.