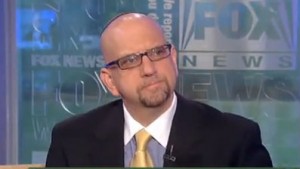 The New York rabbi who videotaped veteran White House correspondent Helen Thomas telling Jews to “get the hell out of Palestine” says he has received numerous death threats and thousands of pieces of hate mail in the days since Thomas’ abrupt retirement.

Rabbi David Nesenoff said he is facing an “overload” of threatening e-mails calling for a renewed Holocaust and targeting his family — a barrage of hate he said he planned to report to the police on Wednesday.

“This ticker tape keeps coming in,” Nesenoff told FoxNews.com. “We got one specific one saying, ‘We’re going to kill the Jews; watch your back.'”

Nesenoff said he was shocked not only by Thomas’ original remarks — which he called anti-Semitic — but by the wave of insults and threats he has received since his videotape brought about her public shaming and the end of her 50-year career at the White House.

“This is something that I thought was a couple of people here or there, [but] it’s mainstream and it’s frightening,” the Long Island rabbi said. “[Thomas] is just a little cherry on top of this huge, huge sundae of hate in America.”

Nesenoff approached Thomas with a camera on May 27 following a celebration of Jewish heritage at the White House. Asked for a comment on Israel, Thomas called Jews occupiers and said they should “go home” to Germany, Poland and the U.S.

White House Press Secretary Robert Gibbs called her remarks “offensive and reprehensible” on Monday, and her employer, Hearst Corporation, sent out a notice announcing that the longtime dean of the Washington press corps was retiring “effective immediately.”

Thomas apologized for her remarks last week after the video surfaced online and was posted to several prominent blogs.

“I deeply regret my comments,” she said in a statement, claiming they “do not reflect my heartfelt belief that peace will come to the Middle East only when all parties recognize the need for mutual respect and tolerance.”

But even as Thomas backed off from her remarks, e-mailers have continued to assail Nesenoff, who has begun posting dozens of malicious letters and YouTube comments on his website, RabbiLive.com.

“We received a lot of positive reaction, beautiful letters … from all over the United States,” he said, but they have been outweighed by the attacks that have flooded in.