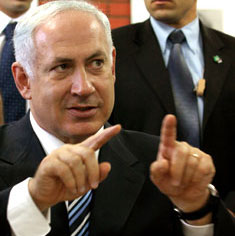 It appears that with a coalition crisis brewing accompanied by audible threats from MK Moshe Gafne that Yahadut HaTorah MKs will not automatically support the government in no-confidence motions, Prime Minister Binyamin Netanyahu has decided it is time to become involved in the Emanuel Beis Yaakov crisis. Not because of the biased and blatantly discriminatory rulings of Justice Edmond Levy, or the principle of the issue at hand permitting citizens to live and educate their children with their religious belief, and not even the welfare of the 250 Emanuel children; but because he is aware that the Emanuel issue is a deal-breaker, one that pierces the heart of the chareidi community and its core values and may compel Yahadut HaTorah to break from the coalition. This could trigger a chain reaction that moves to Shas since the battle is no longer about discrimination, but adherence to Torah Law or secular state law.

Interestingly, polls are showing a shift and increased support for the chareidim as it becomes evident to open-minded secularists that the so-called discrimination in Emanuel is exactly what the Beis Yaakov parents have been explaining from the beginning, the acceptance of suitable students and rejecting those who are not — based on the religiosity of their homes and lifestyle, not ethnicity as the court would like us to believe.

It should now be clear to all that 35% of the Beis Yaakov Emanuel student body is Sephardim, while there are many Ashkenazi girls who were not accepted the school. Who put Yoav Lalum up to his battle, and why Emanuel, and who is backing him financially will most likely be disclosed at some point. Yahadut HaTorah MKs point to the viciously anti-frum New Israel Fund as the source of funding. Others question the active role of HaGaon HaRav Yaakov Yosef Shlita, also questioning why in Emanuel when it is clear this small community of 700 families, a bastion of the Slonimer chassidim is not the venue for to seek to set precedents.

As the prime minister’s schedule today, Wednesday, demands that he attend a Knesset plenum session, he is taking advantage to meet with Yahadut HaTorah officials in Knesset at 1:30pm.