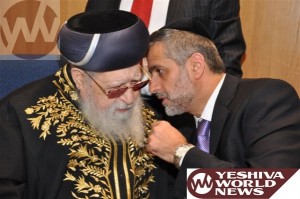 Rabbi Ovadia Yosef has written a letter to President Hosni Mubarak, in which he wished him health, following the Egyptian president’s recent medical treatment in Germany and reports about his deteriorating health. “We pray to the creator of the universe to send you full and speedy recovery,” he wrote.

Prime Minister Benjamin Netanyahu will hand the letter to Mubarak on behalf of Ovadia, during the leaders’ scheduled meeting on Wednesday.

“For your highness, President of Egypt Muhammad Hosni Mubarak, may his glory be exalted,” wrote Shas’ spiritual leader.

“May you continue to lead you countrymen in majesty, courage and strength, for a lifetime and in peace; may you succeed in all your doings, according to your heart’s desire,” the letter read.

Rabbi Ovadia signed the letter with a warm greeting, “Respectfully yours, in the greatness of your virtue.”

The rabbi and Shas Chairman, Interior Minister Eli Yishai, have kept in close touch with Mubarak for many years. Only recently, journalist Yotam Feldman, who was arrested in Egypt, was released from custody with the help of Yishai’s mediation.

Arab media has been reporting about Mubarak’s deteriorating health condition for many years, and recent reports have rekindled the debate over who will inherit the presidency, with his son, Gammal, leading the race.

However, President Mubarak never confirmed such reports and is due to complete his fifth year of his sixth tenure as president. He has yet to announce whether he will compete in the upcoming elections slated for 2011.

Speculations over Mubarak’s health have increased in recent months following his March trip to Germany, where he underwent an operation to remove a gull bladder. Doubts about his medical situation surfaced again last week after Mubarak made a sudden visit to Paris and met with President Nicolas Sarkozy.