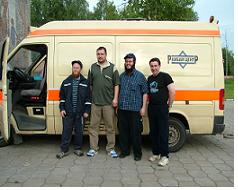 Imagine having to wait more than an hour for an ambulance to show up in a medical emergency, or being told that you can’t stay with your three-year-old child at the emergency room.

Such is the state of emergency medical care in Moscow, leading the city’s Jewish community to muster its resources in support of a volunteer response unit to help families in need. Led by Rabbi Shneur Zalman Halprin, who once worked for Israeli first-responder Magen David Adom and today serves as a Chabad-Lubavitch emissary at the Marina Roscha Jewish Community Center, Hatzalah Moscow has been beating the clock for several years in the fight to save lives.

According to Halprin, the team of 10 volunteers does what it can without the use of a fully-equipped ambulance, moving quickly around Jewish neighborhoods in the Russian capital.

“Most are trauma cases and we can administer first aid and take them to a hospital by car,” says Halprin. If an ambulance is needed, the Hatzalah medic will accompany the patient and act as his or her advocate “so they don’t get lost in the system.”

If a woman is in labor, waiting for an ambulance is sometimes not an option. Halprin, who directs holiday programming for Chabad of Moscow, shares the story of a laboring woman who was stuck in traffic on the way to the hospital. Her husband called Hatzalah and a medic met the couple in their car just as they were entering the city.

Within four minutes, the medic delivered the baby.

“We continued to the hospital,” says Halprin, “which took another two hours.”

According to the rabbi, the local community provides about half of the organization’s budget.

The rest of Hatzalah’s funds come from the Federation of Jewish Communities of Russia led by Russian Chief Rabbi Berel Lazar.

All of the medics are trained by Israeli organizations and retrain at regular intervals.

Halprin says that his group is looking to expand this winter as locals undergo a new training session.

“People don’t think twice about helping,” he says. “They know its importance.”

Click HERE for an article posted on YWN about Moscow Hatzolah just after their launch in 2009.